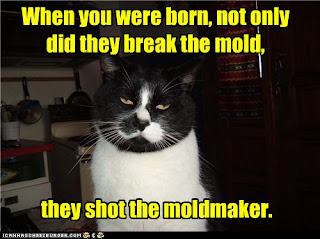 1. Remember last week's loooong list? And how I said I had another 20 in me but was cutting it off for your sake? Yeah. Well. I still have those 20 and ANOTHER week of life rolling around inside my brain.

3. Last Sunday, as we were driving home from church, we turned onto a quiet residential street and saw a bull nonchalantly strolling across someone's driveway. 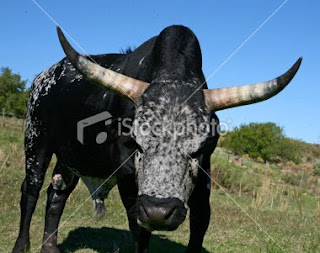 6. One that looked a lot like that one. He was plodding along, all of his latent "WHAT?! You dare to wave a red cape in my direction? Now you must die!" instincts cleverly hidden from the casual observer. He was trying hard to blend into the scenery. Very "Nothing to see here, folks. Bull? What bull? I don't see no stinking bull!" but we were on to him.

7. We called the sheriff's office. The lady asked us to repeat our story. Seconds later, we heard sirens.

8. I sincerely hope none of the officers were wearing red.

9. Last weekend, we also spent Saturday at Holiday World in Indiana. You may recall the results of last summer's vacation Part 1 and Part 2.

10. I'm happy to report a day free of ladybugs flying into my teeth. And free of holes in the posterior region of my pants. Also free of riding death-defying coasters. I figured at four weeks out from my gallbladder surgery, roller-coaster riding might not be the wisest decision.

11. I'm totally going on them next year, though. Of course, the fact that I've just bragged about a lack of ladybugs and holes in my pants means next year when I ride a coaster, a swarm of moths will fly into my face while I'm screaming and my resulting jerk of terror will split my pants seam to seam.

12. If that exact scenario happens, I promise to vlog it for your viewing pleasure.

13. We did engage in a piece of CRAZY that day, however. We decided (That's a euphemism for Clint decided, btw) to drive up that morning, spend all day in the park, and then turn around and drive home that night.

16. This was a plan full of opportunities for epic fail.

17. We were sooooo tired. By the time we neared the outskirts of north Nashville (we live twenty-five minutes south of Nashville), Clint was punching himself in the face just to stay awake. I offered to dump a cup of ice down his back to help, but he wasn't interested in my brilliant idea.

18. Next time, we'll get a hotel. Probably the one across the street from the jail. I'll keep my eye out for geriatric bike gangs and all will be well.

19. Clint spent the weekend in L.A. at the press junket for TNT's new show Rizzoli and Isles, based on the books by Tess Gerritsen.

21. Clint called me to tell me the TNT folks had given all the attending press members a free iPad.

23. I told myself there would be no living with him now and I wasn't wrong. I'm now officially an iPad widow. lol

24. And I have to say, an iPad looks like the Reader's Digest large print version of an iPhone.

25. I tried typing on it for about 10 seconds, had to delete and retype the SAME WORD five times because the keyboard is small and brushing too close to another letter destroys your plan to simply TYPE ONE WORD, and just handed it back to Clint. No. Thank. You.

26. Anyway, the arrival of the iPad was Saturday morning. Saturday night, Clint texted me and asked if I knew who Tess Gerritsen was.

28. He then informed me he was standing right next to her.

29. I may have squealed. I then texted him and instructed HIM to fangirl squeal at Tess on my behalf. I fear he may have under-performed my requested response.

31. I decided "hi" was code for "Ooh, how nice! A fan! If only I could meet her in person and talk!" Or something like that.

32. I also decided I needed an autograph. I texted Clint and asked him to get her autograph. If no paper was available, I told him to volunteer his forehead for the job.

33. Then I waited with bated breath for Tess to call her lawyer and get a restraining order issued against the crazysauce woman in Nashville who wanted her husband's head autographed.

34. Instead, Tess AND THE ENTIRE CAST of Rizzoli and Isles all autographed the title page of Tess's THE APPRENTICE for me.

35. Forget the stupid iPad. This was SO much better. I was giddy too.