Death Is On Its Way 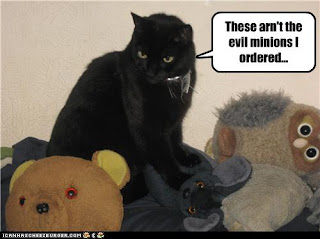 2. I have good reason, though. Being kidnapped and held for ransom by rogue were-platypi isn't exactly the easiest experience to endure.

3. All those webbed feet! All those chattering beaks!

4. I got tired of waiting for ransom to arrive and fought my way to freedom with the clever use of tongs, a Bette Midler cd, and duct tape.

6. I forgot to keep my personalities in their separate cages last week at work. (I tone it down A LOT at work. They don't think so. They think I'm hilariously funny but relatively normal. They don't realize I've rejected the first three responses that came to mind because, yanno, I'm at work and most people there wouldn't know what to do in a conversation about Zombie Goats or Were-llamas.)

9. Anyway, I forgot and made an off-hand comment to a group of new employees wherein I threatened them all with Belly-button Plague if they broke one of our important policies.

11. One of them stared at me like she'd never seen a creature quite like me before and couldn't decide whether to pat me on the head or run.

12. One of them gave clear indications that he was seconds away from calling in the men in little white coats to take me to a nice padded cell.

15. Thankfully, I remembered my separate personality cages before I gave a pithy, possibly snarky observation on the note taking.

16. Spastic Kitten got a cold last week. This entailed a visit to the vet.

17. The vet and the technician fell all over themselves to exclaim over SK. Calling her sweetheart and such a beautiful girl.

18. I mean, yeah, she's beautiful. But so is a full-grown jaguar. Doesn't mean we should be fooled into cuddling something programmed to rip out our jugulars.

19. The vet, however, had zero problem scruffing SK and delivering a dose of oral medicine. She then sent me home with instructions to do the same twice a day.

20. The first time was easy because SK wasn't expecting it. The problem with sociopathic beasts, however, is that they learn.

21. It now takes three of us to pin her down and even then, we all come close to losing limbs we'd much rather keep.

22. I've re-written the beginning of Asylum four times now and think I'm happy enough with it to move on for now. This is a nice improvement over the six times I rewrote the beginning of Casting Stones and the 7 times for Shadowing Fate and the I-refuse-to-put-this-number-in-print times for my first novel.

23. I really like the voice for Abbie, the story-teller for Asylum. She's VERY different from Lilli (story-teller for Casting Stones) and that's a good thing. I like my characters to be fully-formed people, not teaspoon-deep caricatures of each other.

24. We saw Despicable Me last week and LOVED it. It's both hilarious and has heart.

25. This week, we're going to see The Sorcerer's Apprentice. I've been looking forward to this movie so much, I'm giddy.

26. I have an author interview up for this Wednesday and just realized I'd better bake some cupcakes today.

27. I know some boys who will be thrilled about that.

28. And now (just NOW), Spastic Kitten ran up to one of the boys who helped hold her down this morning and scratched him across the thigh.