A Trip To Johanna's Roots 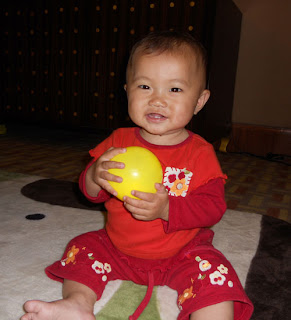 Today was a hard day, in a good way. We'd requested a trip to Fengcheng, the city of Johanna's abandonment and orphanage. Our agency reps (who are FABULOUS and who make sure we are well taken care of every step of the way) took all 8 Fengcheng families on a 1 1/2 hour (one way) bus ride to the city this morning.

The Fengcheng orphanage director takes pride in his job and has kept meticulous records for us. One of the things the director is required to do is run an ad with a baby's picture and where the baby was found because parents have one chance to reconsider their decision and reclaim their child. The director saved that ad for each of the babies from the Fengcheng orphanage, so we not only have a newborn picture of Johanna (Yes, she's always had those cheeks!), we know exactly where she was abandoned.

Today, our agency reps took us on a brief tour of the city, stopping at each point of abandonment so the parents could see it, take pictures, and get any information about that location our reps were able to provide. We were last on the list of stops. Other babies were found on hospital steps, in front of a motorcycle shop, at the entrance of a radio/tv company, and in the middle of a busy city park. Our ad simply said she'd been found at the gate of SWL. We had no idea what SWL stood for. The bus pulled up in front of a clean, fancy (by Fengcheng standards) building and our reps called our names. We left the bus, walked to the gate, and the rep pointed behind the fancy building to a clean, brightly painted building with an orange roof and said, "That's the orphanage."

It took us a second before we understood that Johanna's parents had loved her enough to leave her in the one place she was SURE to be found and taken care of. The entrance to the Civil Affairs Building, which is also the entrance to the orphanage. They wanted her to be safe. They cared enough to want to give her a chance for a life they were unable to provide for her.

I don't know her biological parents' story, but I know China's story. The one child policy makes it nearly impossible for families to have more than one child. The only way a family can have a second child is to either pay a hefty fine (equivalent to an entire month's income in a country where both parents must work just to barely make it) or prove that both mother and father are an only child and therefore need an extra child to help take care of the grandparents when they become unable to take care of themselves.

In China, boys are valued more than girls because they ensure the continuation of the family name and because when a girl marries, she leaves her parents and moves in with her husband's family, leaving no one to look after her family in their old age. Many people choose abortions rather than abandonment. Some try to keep the second child hidden for weeks or months before giving in to what feels like the inevitable and abandoning the child. Some even manage to financially pay for the second child for a few years before the mounting school costs combined with the yearly fine become overwhelming, forcing an abandonment. Those who live in the country (Fengcheng is in the country) are much poorer than those who live in the city. Most could never pay the fees.

I don't know what Johanna's parents faced. Did they already have a child and were unable to pay for a second? Were they worried about their uncertain future and felt convinced they needed a boy? I'll never know, but today I learned this: they loved her. They wanted her to be safe, and they did everything they could to make sure that happened. I just wish I could send them a message letting them know the gift of life they gave her is something we will treasure and protect and that she will have the brightest future we're able to give her. I'm grateful to them. Grateful for her. And grateful that one day I can show Johanna her roots and tell her, beyond a shadow of a doubt, that her biological parents loved her.