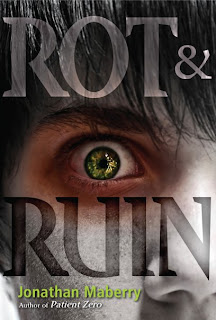 I discovered Jonathan Maberry as I was browsing my local bookstore with a friend. My book shopping method includes hurrying to the YA section and then slowly perusing the shelves for covers that catch my eye. This cover really grabbed my attention, so I read the description and decided to give it a try. (For a thorough explanation of how AWESOME this book really is, check out my review on my Best Reads of 2010 post. It's another chance to win a copy!)

Because this is a satisfyingly long book, I decided to bring it with me on my trip to China. Every afternoon, while Johanna slept, I would sit on the hotel bed and devour this book. The story is compelling, as much for the fact that it's told from the perspective of a fifteen year old boy who SOUNDS like a fifteen year old boy, as for the fact that it's truly a fresh perspective on zombies. I appreciated the humor, the tension, and the complex relationships and found the story lingered with me long after I closed the cover for the last time. When I tweeted about loving this book, Jonathan replied with a gracious thank you and before he knew it, I'd bamboozled convinced him to be on the blog.

I'd usually give a peek at what Rot & Ruin is about here, but the Were-llama himself drags that info out of Jonathan, and I make it a habit to never get in the Were-llama's way. I'm excited to announce that Jonathan is giving away a signed, personalized copy of Rot & Ruin to one lucky commenter. Before I tell you how you can enter the drawing, let me introduce today's guests.

﻿
﻿ Now that you know who's who, let's get to the interview and reveal the amazing cupcake my hubby make in honor of Jonathan's book. (My hubby would just like to say that, while he has nothing against zombies personally, he's a little concerned at the current trend on my blog wherein he's been required to use his cake skillz to portray decay and putrescence. This makes two zombified cupcakes in a row. I call it awesome. He calls it decorating for the dark side and said "All we need is for one of your freaky peeps to ask for a zombie foot and we could put together a frankenzombie." *eyes future interviewees and wonders which one can be coerced into asking for a zombie foot*) With no further ado, let's dive into the interview and reveal the freakishly delicious Zombie Eyeball cupcake my hubby made for Jonathan.

WERE-LLAMA: So, you’re a writer. I’m a super-scary shape-shifter who can command obedience with the awesome power of my glowing red eyes. What do we have in common?


JONATHAN MABERRY: We’re both strikingly handsome and have legions of devoted followers. (I believe it’s the general hairiness that attracts them!)

WERE-LLAMA: I am strikingly handsome, aren't I? I like to spit at my enemies from whichever end is closest to them. Do any of your characters have cool abilities like that?

MABERRY: Nothing quite that cool. Probably the next closest would be Tom Imura from ROT & RUIN, who fights zombies with a katana.

WERE-LLAMA: You're right. It's not as cool as winning a war with the cunning use of bodily fluids. But it's close. If I had a nickname, it would be The Awesome. You?

MABERRY: The Bear. I’m about the same height, build, and general fuzziness of a grizzly (except that I don’t catch my own salmon and I type faster than most bears).

WERE-LLAMA: I hang around this blog because I love stories. What’s your story about? Bonus points if it includes a llama.

MABERRY: ROT & RUIN: It’s been 14 years since First Night, when the dead came back to life. Six billion people have died (and reanimated) since then, and America has collapsed into isolated communities living within the great “Rot and Ruin.” Benny Imura is 15, which means it’s time to get a job or face cut rations, but his general laziness leaves him with only one employment option: join his stuffy, sword-swinging, Japanese half-brother, Tom, as an apprentice bounty hunter. This means heading beyond the gates to slice and dice “zoms,” but Benny quickly begins to see the undead in a new light—as well as realizing that Tom is much more than he ever let on. ROT & RUIN is a story about discovering the value of life and what it means to be ‘human’. No llamas, alas, but that’s one of the things that make this post-apocalyptic world so bleak.

WERE-LLAMA: A world with  no were-llamas is bleak indeed. You’re making me a cake worthy of my awesome Were-llama status and decorating it to represent your story. What does it look like?

MABERRY: It looks like a shrub. Llamas love shrubs. But a-ha! It’s really chocolate inside. Kind of a were-cake motif.

WERE-LLAMA: A chocolate were-cake? *glares at you with Awesome Red Eyes* Bring me a shrubbery! Any Were-llamas in your book?

MABERRY: It’s always possible, but how can you tell? They blend in so easily.

WERE-LLAMA: We are masters of disguise. Except for the glowing red eyes, but by the time you see those, it's too late. Spoiler Alert: We always win. Anyone in your stories who might be a Were-llama and you just haven’t figured it out yet?

MABERRY: I sometimes wonder about The Lost Girl (from ROT & RUIN). She spends a lot of her time alone…or, is she really only a girl some of the time and when we don’t see her that means she’s in her Llama form? Hmm.

WERE-LLAMA: You know a girl were-llama? *tosses head to achieve ultimate Awesome hair-do and spits for good measure* You might make an acceptable minion, but I have to ask: Llamas or camels and why? Think carefully.

MABERRY: Camels are cheap knock-offs of Lllamas.
WERE-LLAMA: So few people realize that. I give you a baby Were-llama as a companion. What do you name her?

WERE-LLAMA: My favorite word is “awesome” because, yanno, look at me. What’s yours?

MABERRY: Cool. I say it too much, too often, and seldom at the appropriate time. Which sometimes makes people think I’m onto something they aren’t seeing. Which is cool.

WERE-LLAMA: As a young Were-llama, I dreamt of taking over the eastern seaboard one face full of spit at a time. What did you dream of doing when you were young?

MABERRY: I wanted to grow up to be Richard Matheson, but ultimately I realized that his clothes wouldn’t fit me. I decided to be me instead.

WERE-LLAMA: I see you kept his facial hair, though. Good call. Cake or cookies?

WERE-LLAMA: Is that my shrubbery you're eating?! *gives you Doomy Glare of Death* Do you share chocolate?

MABERRY: Only with my wife because by Pennsylvania commonwealth law she owns half of mine. Otherwise…no. Get away.

WERE-LLAMA: What a coincidence. Neither do I. *takes chocolate shrubbery were-cake and swallows whole* The Zombie Goat invasion is upon us. How will you fight them off?

Jonathan Maberry is the NY Times bestselling author, multiple Bram Stoker Award winner, and Marvel Comics writer.  His recent works include The King of Plagues, Rot & Ruin, Marvel Zombies Return, The Wolfman, Patient Zero, and Wanted Undead or Alive.  Since 1978 he has sold more than 1200 feature articles, thousands of columns, two plays, greeting cards, technical manuals, how-to books, short stories, and more.  His Joe Ledger thrillers have been optioned by Sony Entertainment and are in development for TV.

Thank you, Jonathan, for such an entertaining interview! You were more than a match for the Were-llama. To learn more about Jonathan and his books, head to his website.  And now, for Jonathan's exciting giveaway! He's giving away a signed, personalized copy of Rot & Ruin to one lucky commenter. U.S. entries only, please. Here's how to enter.

The contest is open until 8 p.m. (central time) Sunday, February 13th. Please check back to see if you've won and to claim your prize!