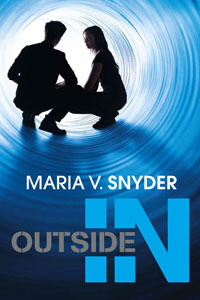 I discovered Maria Snyder when a friend loaned me her copy of InsideOUT (which made my list of best reads from 2010). Maria's world-building is seamless. Even though she introduces an entirely new culture--with its own set of customs, rules, and complexities--I was instantly immersed in the story. In fact, the strangeness of the new world I found myself in was part of what made the book so fascinating. Plus, there was a mystery to solve, a potential romance to cheer on, and a plot twist I never saw coming. Yay!

The sequel to InsideOUT hits the shelves March 1st, and I can't wait to get my hands on it! Here's a peek at OustideIN. (Spoiler Alert! If you haven't already read InsideOUT, this will give some details away.)


Okay, I did prove that there's more to Inside than we knew. That a whole world exists beyond this cube we live in. And finding that led to a major rebellion-between worker scrubs like me and the snobby uppers who rule our world. Make that ruled. Because of me, we're free. I thought that meant I was off the hook, and could go off on my own again-while still touching base with Riley, of course. He's the one upper I think I can trust. But then we learned that there's outside and then there is Outside. And something from Outside wants In.

I can't wait to read OutsideIN to learn what happens! I've already ordered my copy, but YOU might win one of your own. Before I give you details on that, let me introduce today's guests. After perusing her options, Maria decided to spar with the always-charming Captain Jack Sparrow.


Now that you know who's who, let's dive into the interview and reveal the cupcake my hubby made in honor of Maria's books. As a side note here, my hubby would like to fervently thank Maria for A) Not requiring another zombified limb made out of cake and frosting B) Having the good sense to have something as simple as pipes be a main theme in her book and C) Not requiring another zombified limb made out of cake and frosting. (And here I thought he was excited to build his own frankenzombie!). The world Trella lives in has a massive structure of large pipes, and Trella spends a lot of time cleaning, maintaining, and ultimately hiding and spying from those pipes. In honor of that, my hubby made a cupcake sculpture with intersecting pipes. Without further ado, I give you the pipe cupcake structure and Maria's interview with Captain Jack! 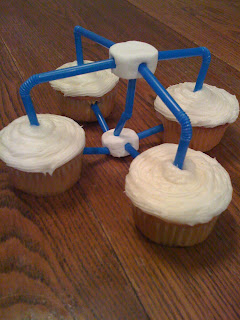 
I would like to say I was a pirate, but I was raised to follow the rules and think I’d be more comfortable in the Royal Navy. Plus, no offense to present company, but there’s something about a man in uniform….yummy!

2. Darling, I wear a uniform too. Notice the dashing captain's hat. What’s your favorite thing to do in Tortuga?

Lie on a beach and drink rum punch. :)

3. I'm forced to point out that while most men in uniform wouldn't find the time to lay around on the beach drinking rum punch with you, I'm more than willing. I’m offering you free passage aboard my ship to anywhere in the world. Where shall we go, love?

Galapagos – I always wanted to visit and see all the animals.

4. Who is the hero of your story most like: me (savvy, debonair, and unquestionably smooth with the ladies), the insufferably honorable Will Turner, or that deceptive little minx Elizabeth?

Riley is most like Will Turner – reliable, dependable, but willing to break a few rules if his love is in danger.

5. I'll forgive him for the reliable and dependable parts since he knows how to be a rule-breaker for love's sake. Rum? Or more rum?

If I had my choice, it would be a glass of red wine. Except for on hot tropical nights, then it’s rum!

6. With me, they're all hot tropical nights, my dear. Which leads me to the age old question: Why is the rum always gone?

I’d check with your crew, mate. With that group of scallywags, I’m surprised you get any rum at all.

7. You may have a point. *looks over shoulder at scallywag-ridden crew and hides rum bottle behind back* What’s the most piratish thing you’ve ever done?

I was a crew member on the US Stars and Stripes racing yacht for a 12 meter race. We won by inches. It was so fun – racing through the waves, hanging on for dear life and being chased. The US SS would leave the Black Pearl bobbin in her wake.

8. You've cast aspersions of a libelous nature against my ship. I hope you're prepared to put your boating skills where your mouth is. Are they rules? Or more like guidelines?

Depends on the situation, but I lean towards following the rules. Curse those 12 years of catholic school!

9. Twelve years?! *shudders* Darling, it's a wonder you drink anything BUT rum. I understand you’re a story-teller. Any undead monkeys in your stories?
No undead monkeys, but plenty of nasty Pop Cops. They’re the Population Control Police and they’re in charge. If they catch you breaking the rules, then they’ll feed you to Chomper. Chomper is like the Kraken, it will chew you into little pieces. Except Chomper will spit you out and the Pop Cops will use the pieces for fertilizer.

10. Thanks, but I'd rather not, if it's all the same to you. Any curses? Heartless monsters? Irritating women who insist on taking matters into their own hands?

There is an unknown threat coming from the Outside which could be a heartless monster or just some lost souls. Trella is irritating to certain people, but her problem is not taking charge when she should, which leads to all kinds of trouble.

11. I personally despise unknown threats. So much better when one knows what one is facing so one can decide if one should run away to fight another day. One of my favorite words is “egregious.” Care to share one of yours, love?

Plethora. It explains so much about my life and the state of my office. As in, “Maria has a plethora of junk in her office.”

12. I used to have a plethora of rum aboard this ship. *hiccups* I'm not precisely sure what happened to it. Parlay? Or draw your sword?

Draw my sword! I’ve taken karate, self-defense classes, fencing, and gymnastics over the years. I’m not going to waste my time or breath on Parlay.

13. A woman after my own heart! Not in a literal sense, of course. I hope. You’ve got a crowd of cursed sailors and a nasty sea monster on your trail. How do you escape?

I call my friend and Stormdancer Kade. With his magical ability to control the weather, he would make sure I had plenty of wind in my sails and that they didn’t.

14. Does he accept payment in mostly empty rum bottles? Because I use a good stiff breeze myself. Romantic night in? Or adventure on the high seas?

Adventure on the high seas! I love to travel and meet new people.

15. Excellent. We shall begin forthwith! My personal motto is: Take what you want, give nothing back. What’s yours?

Don’t give up. With my first book, Poison Study, I sent it out to over 40 literary agents and 17 publishers. All rejected it. Then number 18 bought the book and I’ve been writing and publishing ever since.


Wonderful advice, Maria! Thank you so much for such an enjoyable interview. I think you gave our beloved Captain a run for his money! (No one has EVER dared insult the Black Pearl before.)

To learn more about Maria and her books, head to her website or her blog. To read the first chapter of OutsideIN, go here. Warning! May cause an uncontrollable urge to head to Amazon and order the book!

Of course, the fun isn't over yet. Maria is offering a signed, personalized copy of OutsideIN to one lucky commenter! (US and Canada only, please) Here's how to enter:

The contest is open until 8 p.m. (central time) Sunday, February 20th. Please check back to see if you've won and to claim your prize!


Good luck to all, and happy reading!