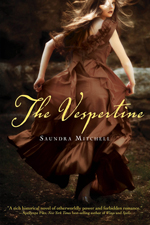 I've known Saundra via Twitter for some time, and have always admired her friendliness, industry knowledge, and sense of humor. But when she entered into an 80's flashback contest with me (and a few others) and not only held her own, but sort of blew the rest of us out of the water, I decided she was my kind of girl. :) I've been hearing nothing but amazing things about THE VESPERTINE, so I was thrilled when Saundra agreed to be on the blog. (I wonder if she's wearing leg warmers and a banana comb while rocking out to a hair band ballad right now?) Here's a peek at THE VESPERTINE:

The summer of 1889 is the one between childhood and womanhood for Amelia van den Broek-and thankfully, she’s not spending it at home in rural Maine. She’s been sent to Baltimore to stay with her stylish cousin, Zora, who will show her all the pleasures of city life and help her find a suitable man to marry.


Archery in the park, dazzling balls and hints of forbidden romance-Victorian Baltimore is more exciting than Amelia imagined. But her gaiety is interrupted by disturbing, dreamlike visions she has only at sunset-visions that offer glimpses of the future. Soon, friends and strangers alike call on Amelia to hear her prophecies. Newly dubbed “Maine’s Own Mystic”, Amelia is suddenly quite in demand.

However, her attraction to Nathaniel, an artist who is decidedly outside of Zora’s circle, threatens the new life Amelia is building in Baltimore. This enigmatic young man is keeping secrets of his own- still, Amelia finds herself irrepressibly drawn to him. And while she has no trouble seeing the futures of others, she cannot predict whether Nathaniel will remain in hers.


When one of her darkest visions comes to pass, Amelia’s world is thrown into chaos. And those around her begin to wonder if she’s not the seer of dark portents, but the cause.

Victorian Baltimore, romance in trouble, and intrigue? Sign me up! Saundra decided to be interviewed by the always debonair Captain Jack Sparrow.

Before we get to the interview, it's time to reveal the gorgeous cupcake my hubby made in honor of Saundra's book. Saundra sent me a few pictures of things that are significant in THE VESPERTINE, and my hubby chose to make an edible replica of a sunburst jewelry charm. Without further ado, I give you the sunburst cupcake and Saundra's interview with Captain Jack. 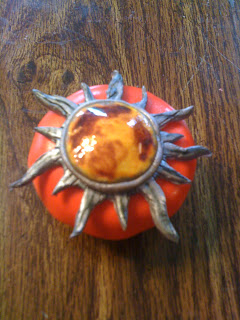 
I would classify myself as neither. If I said HMRN, we'd be enemies. If I said pirate, we'd be competitors. I fly a curiously neutral flag, sir. Although it does have a tiny green ninja in the bottom right hand corner, which is especially meaningful.

2. I am unfamiliar with the concept of a tiny green ninja, but as long as ninjas don't drink my rum, all is well. What’s your favorite thing to do in Tortuga?

Oh, you know. Kicking back with some reads. Selling dead men's secrets. The usual.

3. Hm. An entrepreneur of the shady and somewhat questionable side? Darling, you intrigue me. I’m offering you free passage aboard my ship to anywhere in the world. Where shall we go, love?

Great Britain. I want to see Tintagel and Glastonbury Tor, and the stone rings, and the old Roman roads, and Hadrian's Wall, and Sutton Hoo, and the Elgin Marbles and all the lovely things from Egyptian Antiquity that the British Museum has in its possession. And since we're already in the neighborhood, be a dear and nick us over to Ireland, too!

4. *eyes you carefully* My love, I regret to inform you that should I set boot on merry old England's shores, those insufferable wool-coated navy men shall do their best to see me hung until death. Most unpleasant. Who is the hero of your story most like: me (savvy, debonair, and unquestionably smooth with the ladies), the insufferably honorable Will Turner, or that deceptive little minx Elizabeth?
Amelia can be smooth when she wants to be, but for most of the book, she's trying to be good. Even though she fails miserably at it, that counts you out of the running, I'm afraid! Ultimately, she decides that freedom is worth more than propriety, so I expect she and Elizabeth would mix nicely.

5. In that case, remind me never to kiss Amelia. I rather like the thought of remaining alive. Rum? Or more rum?
Jack, darling... spiced rum.

6. Darling, a good rum burns the esophagus and lights a fire in the lower intestines. Adding spice to the mix seems a tad pinch of overkill, but I do enjoy a woman with a sense of adventure! Which leads me to the age old question: Why is the rum always gone?

The tiny green flag ninja hates partials. He finishes all the bottles off. It gives him purpose and meaning. And hangovers. That's why he's green.

7. I fail to comprehend how a tiny green anything is finishing off my rum. I'll run him through with my longsword if he doesn't bugger off. What’s the most piratish thing you’ve ever done?

Some friends and I tried to board a vessel that was not of our own belonging in Baltimore once, but that was just a misunderstanding. We stopped as soon as we understood that proceeding would be a felony. Or a maritime thingie of high bad.

8. Darling, darling, darling ... one does not stop when one is presumably caught red-handed. One simply changes courses and does the unexpected in order to still get one's hands on what one wants. Are they rules? Or more like guidelines?

Everything is a guideline. Actually, even guidelines are more suggestions. And suggestions are generally meant to be ignored.

9. Stop. You had me at suggestions. I understand you’re a story-teller. Any undead monkeys in your stories?

No, but I did just write a story that contains three flaming witches, an earthenwork defiler, and a pair of palm-sized monkeys named Cursor and Celeris. Does that count?

10. Palm-sized monkeys? What is it with you and tiny little things of a deplorable nature? Any curses in your story? Heartless monsters? Irritating women who insist on taking matters into their own hands?

All of the young women in my books take matters into their own hands. Surely a worldly gentleman such as yourself isn't threatened by bright girls with sharp minds. They wouldn't be interesting if they weren't thinking!

11. Depends on what they're thinking. One of my favorite words is “egregious.” Care to share one of yours, love?

Existential. There's a lot of tongue-play involved in the saying of it, and a lot of brain-teasing in the meaning of it.

12. I've had far too much rum this early in the day to participate in any sort of brain-teasing. The other option is still on the table, however. Parlay? Or draw your sword?

Bring the blades; I have a tiny green flag ninja as my second!

13. I begin to suspect YOU are the reason my rum is gone, and this tiny green flag ninja is the natural byproduct of your over-zealous rum consumption. You’ve got a crowd of cursed sailors and a nasty sea monster on your trail. How do you escape?

With generous applications of aqua regia in my wake. Since it dissolves gold, I figure very few will pursue me once they realize their booty is in danger.

14. You are a brilliant little thing, aren't you? *surreptitiously checks own booty for evidence of dissolvitude* Romantic night in? Or adventure on the high seas?

Why isn't romantic adventure on the high seas an option? We have all this rum...

15. I think we shall do nicely together, my love. *hides a few spare bottles of rum, just in case* My personal motto is: Take what you want, give nothing back. What’s yours?

You're gonna get kicked in the face, but you have to keep going. Which I think is a motto you've probably already internalized, amirite?

Thank you, Saundra, for such an entertaining interview! To learn more about Saundra, visit her site. To purchase THE VESPERTINE (or any of her other books) go here. Of course, the fun isn't over yet! Saundra is giving away a signed copy of THE VESPERTINE to one lucky commenter. (Giveaway is North America only) Here's how to enter:

The contest is open until 9 p.m. (central time) Monday, April 25th. Please check back to see if you've won and to claim your prize!