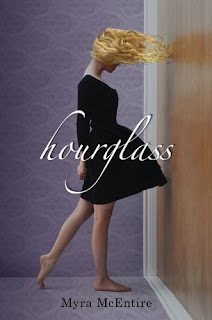 I first met Myra when she chased me down the hall at church and said "Hey! I heard you're a writer! I'm a writer too!" Those fateful words began what is now one of my most treasured friendships. BUT, before we became close friends, we met one night at the local bookstore for coffee and writer talk, and I took a look at the first few chapters of HOURGLASS. You know that delicious little tingle you get up your spine when you start reading a book you realize is going to totally rock your socks off?

I got that tingle and in the years since then, through every revision and edit, I haven't lost it. HOURGLASS is funny, heart-wrenching, compelling, sizzling, and unexpected. The plot twists alone will break your brain in all the best ways. And the romance? Um ... YES. And I love that the time-travel is based in quantum physics and that the southern setting actually feels like the South I know. Here's a peek at HOURGLASS:

For seventeen-year-old Emerson Cole, life is about seeing what isn't there: swooning Southern Belles; soldiers long forgotten; a haunting jazz trio that vanishes in an instant. Plagued by phantoms since her parents' death, she just wants the apparitions to stop so she can be normal. She's tried everything, but the visions keep coming back.So when her well-meaning brother brings in a consultant from a secretive organization called the Hourglass, Emerson's willing to try one last cure. But meeting Michael Weaver may not only change her future, it may change her past.


Who is this dark, mysterious, sympathetic guy, barely older than Emerson herself, who seems to believe every crazy word she says? Why does an electric charge seem to run through the room whenever he's around? And why is he so insistent that he needs her help to prevent a death that never should have happened?

Trust me. This is a fabulous debut you don't want to miss.When I invited Myra on the blog in honor of the release of HOURGLASS, she couldn't wait to take on the legendary Captain Jack.


1. Would you classify yourself as a pirate or a member of Her Majesty’s Royal navy? Why?

Oh I am such a pirate. My eyeliner is always down to my waist and my hair hasn’t seen a brush in years. I do, however, have good dental hygiene. Unless I’m on deadline.


2. You sound quite ... fetching. What’s your favorite thing to do in Tortuga?

3. Hands off my coins, love. Unless you'd like to bribe me with rum? I’m offering you free passage aboard my ship to anywhere in the world. Where shall we go?

Johnny … I mean … Jack? I’ll go anywhere you take me. I DID hear about a super spooky house in Collinsport, Maine. Supposedly this vampire lives there? And he looks a lot like you. But cleaner.

4. A cleaner version of me, eh? Give him a few swallows of rum and a night in Tortuga, and we'll fix that.  Who is the hero of your story most like: me (savvy, debonair, and unquestionably smooth with the ladies), the insufferably honorable Will Turner, or that deceptive little minx Elizabeth?

He’s insufferably honorable, he is, but his best friend is cut from the Jack Sparrow cloth. Might even dress like you occasionally. Partial to rum.

6. You saucy minx, you! But I bet if you were aboard my ship, you'd learn to love rum as well. Which leads me to the age old question: Why is the rum always gone?

I’m going to blame the monkey.

7. Curse that blasted undead monkey! What’s the most piratish thing you’ve ever done?

That time I rode in a paddle boat? Either that or the time I bought a Tortuga rum cake in the Palm Beach airport for C.J. Redwine. (Also? I heard she has a thing for you. Might want to be careful.)

8. A paddle boat? For the sake of your sea cred, I hope you stole it and used it to transport said Tortuga rum cake across enemy lines. (And yes, she does rather have a thing for me, doesn't she? Not that I blame her, of course, but still, I'm keeping a weather eye on that one.) Are they rules? Or more like guidelines?

9. You DID steal that paddle boat, didn't you? I understand you’re a story-teller. Any undead monkeys in your stories?

There are some ducks in the book I’m working on now. They aren’t undead though. UNLESS …

10. Undead ducks? Darling, you're giving me nightmares. Any curses? Heartless monsters? Irritating women who insist on taking matters into their own hands?

There are dead people. And a snarky teen who can totally take matters into her own hands. And also kick your ass.

11. I believe you've just insulted my honor. *checks today's agenda* I'll avenge it sometime after "Drink a jug of rum" and "steal King George's lunch." One of my favorite words is “egregious.” Care to share one of yours, love?

12. Sounds like a particularly productive sneeze. Parlay? Or draw your sword?

I’d rather watch you draw yours.

13. Darling, you'll make me blush. And also? It's a date. You’ve got a crowd of cursed sailors and a nasty sea monster on your trail. How do you escape?

Well, I certainly don’t set the rum on fire.

14. Where have you been all my life? Bring your unbrushed, vodka-drinking, paddle-boat stealing self onto my boat and stay for a while. Romantic night in? Or adventure on the high seas?

How about a foot rub and a nap? I have kids, Jack. By any chance do you “manny”?

15. Let me make one thing perfectly clear. I am NO ONE'S "manny." Unless ... you don't happen to have a spare ship lying around, do you? My personal motto is: Take what you want, give nothing back. What’s yours?


Thank you, Myra, for such an entertaining interview! To learn more about Myra, visit her site. To purchase your copy of HOURGLASS, go here.

Of course, the fun isn't over yet! Myra is offering a signed copy of HOURGLASS to one lucky commenter. Contest is open to North American entries. Contest is open until 8 pm Sunday, June 19th. To enter, fill out the following form and don't forget to leave a comment at the bottom of the post. Also, VOTE in the poll on the sidebar to help choose Myra McEntire's Top Five post for next week's SUPER AWESOME GIVEAWAY! :) Good luck!