It's All Fun And Games, Y'all! 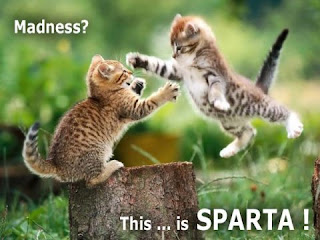 Instead of my usual Monday list, I thought I would give you the inside scoop on my recent trip through Kentucky. We left Thursday around lunch time with the goal of reaching our destination (Florence, y'all!) by dinner. Florence is right next to the Ohio border, facing Cincinnati.

I've been to Kentucky before. We usually make an annual summer trek to Bowling Green (just a few miles over the border from Tennessee) to play at Beech Bend Park. I've always considered Kentucky to be a beautiful state but it took driving through the whole state to fully experience the, um, cosmopolitan flair that is Kentucky.

What? You think Kentucky isn't cosmopolitan? I beg to differ. Driving through Kentucky is like having a short tour of some of the world's international highlights. Here are just a few of the cities we passed:

Glasgow
Warsaw
Elizabethtown
Somerset
Sparta
English (not to be confused with French or Hungarian which, while they weren't listed along the highway, must surely be there somewhere.)

And, of course, our destination was Florence (y'all!).

As we passed one well known name after another, we began speculating that perhaps the founders of these fine cities in Kentucky were unaware that perfectly acceptable city names still remained up for grabs. Either that, or they had very high hopes for their little patch of earth.

As we neared Florence (y'all!), we saw a sign for a Big Bone Lick State Park. Now, I realize the names of state parks are probably sacred on some historical level but still, this is a name I'd petition to change. Honestly.

When we drove into Florence, we were greeted with a large water tower on whose side was painted the following: Florence Y'all!

It's a lovely place. Really. Gorgeous scenery, decent restaurants and shops, nice homes. But HOW can you take yourself seriously with that as your city motto??

I had bigger problems at this point, though, than trying to understand how any self-respecting city council could allow Florence Y'all! to happen. My left eye was burning with every blink. I figured I had dirt on my contact and that once we arrived at the hotel, it was an easy fix.

We checked it, got our suite, and I immediately removed the lens. There was no relief. I flushed my eye with contact solution and felt marginally better. We were ready to leave for dinner, so I washed my contact lens and popped it back in. Instant excruciating pain. The kind that made me want to gouge out my eye just to get some relief.

I wasted no time removing the offending lens and using my glasses in its place. It didn't take long, however, to realize the pain was still there and getting worse. My eye felt like something was lodged in it, though I couldn't imagine what.

That night, I could barely sleep. Closing my eyes didn't relieve the pain. I got desperate enough to slide my finger across the entire surface of my eye, searching for the problem. (Those of you who know me well will realize that this indicated a very serious state of affairs. I can handle blood, guts, puke, you name it, but eye stuff totally makes me sick to my stomach.) I found something. A crinkle of something stuck to the top of my eye, wedged securely under my lid and refusing to move.

I scraped. I pulled. I managed to pinch the skin of my eye, something I never dreamed possible, but it wouldn't come out. Finally, I resorted to prayer and just asked that either the offending object come out on its own or I lose all feeling in my left eye.

In the morning, the pain was less. We drove to the nearest eye doctor's office just as they opened (Wing Optical...fantastic people) and I told them my story. They hurried me to the back and three separate people pulled my eyelid up and had a look. No one could find anything. The doctor came in, grabbed a long Q-tip, told me to hold on to the chair (turns out he would have been better served to just strap me down) and then rolled my eyelid up over the Q-tip like it was one of those old-fashioned window blinds.

I hung on to my chair. I bit my lip. I frantically tried to distract myself with a running litany of all the things I despise about chick flicks. Nothing helped. As he held my lid away from my eye and examined me closely, my gag reflex kicked in. He's just lucky I'd been too tired to eat much that morning, otherwise the whole encounter would have moved from amusing (to him) to a clean up on aisle three.

In the end, he found a large area of scratched irritation and we determined that a piece of my old contact lens (I'd changed over two days earlier) had stuck to the top of my eye but had come out during the night as I was scraping and pulling. He gave me eye drops and strict instructions not to wear contacts for at least another day.

From there, we went to the Creation Museum, a really cool place with dinosaur stuff, a special effects theater that shot water in our faces and vibrated our chairs, a hay ride around the botanical garden, and a really cool video documenting the existence of dragons.

I suppose we'll return at some point. The kids had a blast. Perhaps next time we'll expand our horizons and take in the sites at Glasgow, Warsaw, and Sparta as well. If the city council at Sparta has any sense at all, their water tower reads "THIS Is Sparta Y'all!"

*As a side note, I just ran Google's spell check on this entry and realized that y'all is in the official Google dictionary. Wow.*
- October 20, 2008