I shamelessly stole this post idea from my friend Kerry Allen on the (perhaps erroneous) assumption she's too busy to hunt me down and make me pay for the theft. 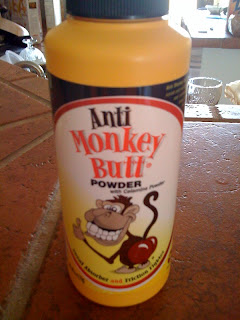 1. Someone actually makes a product called Anti-Monkey Butt Powder. This is wrong on so many levels. First, who goes around complaining of monkey-butt? Second, even if you had a raging case of monkey-butt (Symptoms include scratching like a ball player and consuming sickening amounts of bananas), would you honestly be willing to publicly purchase the product pictured above? Also? If you're dating, this might be the deal breaker when your special someone goes through your medicine cabinet.

2. I channel Hannibal Lecter when given sedation. I imagine my picture now graces the walls of the local hospital with the slogan "If you see this girl, guard your internal organs lest they be turned into a delicious pie."

4. I think my friend Kerry should bake me a pie. A thieving blogger pie. Including a nurse's liver is, of course, optional.

5. Spastic Kitten has truly lost what little slice of kitty sanity she had left. She now spends her days crouched on the floor staring at a small smudge about five feet up on our glass storm door. Every few minutes, she'll leap into the air, slam into the glass door, and then slide to the floor. I could clean the smudge, but she seems so amused and hey, she's attacking a glass door instead of me. I'm okay with that.

6. I have no arts and crafts skillz. I already knew that, of course, but apparently my hubby was laboring under the notion that some small smidgen of talent lurked within me and I was just holding back on him. Last Friday, he was working to get a cake done for a client's party and needed the following made out of fondant: 96.3 When he delegated that task to me and I expressed my (not inconsiderable) doubts as to my ability to execute this (sort of scary) feat, he assured me it was as easy as playing with play doh. Clearly, he's never seen me play with play doh. I rolled fondant snakes and sort of smooshed them into reasonable facsimiles of the numbers and then made a totally awesome cube for the period. He took one look at my efforts, manfully maintained a straight face for about .00000008 seconds, and then started laughing. When I glared and said "I told you I couldn't do it!" he wisely complimented my cube and used it on the cake. I doubt he'll be asking for my help again any time soon.