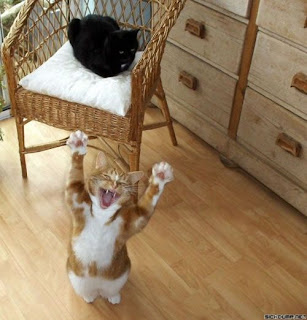 I've been sitting on this news for over a week, now. Remember last week when I said part of my May was WOW? This is the WOW, announced in Publisher's Lunch today:

CJ Redwine's THE COURIER'S DAUGHTER, a YA fantasy debut in which an independent girl sets out to rescue her father from the Wasteland outside their cloistered city and in the process finds danger, heartbreak, and a new romance with her father's apprentice, to Kristin Daly Rens at Balzer & Bray, at auction, in a three-book deal, by Holly Root at Waxman Literary Agency

I'm so thrilled. I have no idea how to make this font look like the font I started with, but my status as resident TechIdiot doesn't matter because I sold!! :)

I'm really excited to work with Kristin. I had phone calls with each of the editors interested in my book, and I took detailed notes. Except with Kristin. I got so caught up in enjoying the conversation with her, that I didn't take a single note. When I hung up, I realized what I'd done, and that I had no time to recall all the pieces of shiny awesomeness from our conversation, so instead, I simply wrote "I love her!!!" and moved on.

How fortunate to be able to work with someone whom I truly enjoy, and who has the same vision for my book as I do!

Also? My agent Holly did such an amazing job in selling this trilogy that I get to quit my day job once I receive the advance and stay home to write and be a mom. YAY!!!

I'm so overwhelmed at the outpouring of good wishes and support I've received today on Twitter, FB, and my inbox. Thank you to all who've celebrated with me.

And extra thanks to Katy, Mandy, Heather, Sara, and Shannon for being my first readers and for helping me make this book shine. :)
- May 19, 2011 77 comments:

Bring Your Crazy To ME

2. Feel free to sternly admonish me, or slip a little money toward Beth Revis for her next dastardly assault against my person.

3. I don't know how it can possibly be the middle of May already.

4. I suspect nargles had something to do with it.

5. My May has been full of BUSY and WOW and YOU HAVE GOT TO BE KIDDING ME.

6. The BUSY is kind of boring, actually. It involves working the day job, neglecting my email account, fighting a losing battle with the laundry, and desperately trying to keep food in my cupboards.

7. Three boys (1 teenage, 2 almost)? Eat like maybe this meal, THIS MEAL, this one they're eating five seconds after their last meal, will be all the food they ever see again.

8. I've taken to hiding food just to make it last.

9. I've advised them that perhaps they should educate themselves on any edible foliage available in Middle Tennessee, and then hie themselves to a local field and forage for their supper.

10. My BUSY also included teaching workshops and critiquing two holy-crap-awesome books for two of my CPs.

11. Sadly, my BUSY did not include a role in the upcoming Pirates movie. Or lunch with Johnny Depp. Or well-deserved recognition as the reigning Queen of __insert appropriate title here__.

12. My WOW moments I've either blogged or am planning to blog, so I won't take the fun out of reading a future blog post by detailing it now.

15. Speaking of llamas, some of my employees were talking the other day, and as I approached, they pulled me into the conversation with the following totally irresistible question: What animal would you hate to be killed by?

16. Naturally, I quickly clarified my staunch Do Not Die By Animal, Vegetable, or Mineral policy.

19. They all responded with varying degrees of shock, laughter, and bemusement. Turns out, they all said stuff like bears, tigers, jaguars, or snakes.

20. I don't actually want to die by bears, tigers, jaguars, or snakes either.

21. But at least THEN, my obituary could sound like I was a swashbuckling adventurer! A daring explorer! Bear Grylls!

22. There's no dignity in death by llama.

24. And while llamas are fierce and mean and thoroughly bad-tempered when they want to be, nobody really expects to be killed by one, so therefore, not only is there a loss of dignity and face, there's also the potential to become an urban legend--the one woman stupid enough to get herself axed by an Alpaca.

26. On the YOU HAVE GOT TO BE KIDDING ME front, two things of note.

27. One, both our air conditioning units said Adios, Muchachos! this spring. Probably because of a llama.

28. One cannot face a Middle Tennessee summer without air conditioning.

29. The weather climbed into the high 80s and low 90s this past week, and we were MISERABLE.

30. Which meant the kids were miserable.

31. Which meant WE were miserable times a gazillion and forty-six.

32. Yesterday, we finally got both units replaced, the house cooled down, and everyone finally slept well for the first time in days.

33. The other YOU HAVE GOT TO BE KIDDING ME note is this:

35. Against all odds, I came in contact with someone else a few days ago who pretty much believes the same thing. 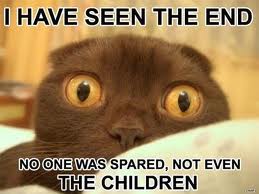 2. Yes. Because somehow, Monday-Wednesday slipped into a swirling vortex of DOOM, never to be heard from again.

3. But during my stint in the vortex of DOOM, I had an encounter which must be blogged.

Me: Welcome to your first day of training! I've had lunch served for us. If you could please be seated, we'll eat, and then get started.

New Employee: *sits* *looks at food* This looks good. I ate something earlier because I had to take medication for my __insert incomprehensible medical term here__. They say never to take medication on an empty stomach. The last time I did that, I was puking my toenails up for a week.

Me: *pushes own food away* How charming.

NE: I mean, you can't mess with an empty stomach, you know?

NE: *takes a huge bite and leans forward* So, do you think the world is going to end in 2010 like they say it is?

Me: I beg your pardon?

NE: The world? Do you think it's going to end in 2012? Because everyone says it will, you know.

Me: Ah, no. I don't. I don't think anyone can predict something like that.

NE: So you discount all the proof from all the scientists who say it will?

NE: ALL the scientists.

Me: *thinks snarky thoughts about scientists who wear tin foil as headgear, but keeps polite smile plastered to her face* I think we don't need to worry about something we couldn't possibly control. Isn't it better to live your life to the best of your ability TODAY?

NE: Oh, sure. Yes. But you know, we're living on an active volcano.

Me: *checks new employee for signs of tin foil headgear*  Are we?

NE: The whole earth is just one giant volcano. One day it will erupt and then where will we be?

Me: Wishing we had marshmallows and chocolate?

NE: *blinks* I don't know what good that will do you when you're about to be consumed by flaming lava.

NE: And under the volcano is nothing but water, so if one doesn't get us, the other will. The whole earth is just going to crack open and let it all through. The scientists say so.

Me: Well, wouldn't the water counter-act the lava?

NE: *stares at me* That's not what all the scientists say. Besides, didn't you see that movie?

NE: The one where the world ends in 2012 because of natural disasters.

NE: It's already begun. Look at the tornadoes. The floods last year. Japan.

Me: I don't think 2012 is supposed to be taken literally.

NE: They were right on track with what the scientists say.

Me: It's not a documentary. You know that, right?

NE: It's all going to end in a few months.

Me: I wonder what it would take to speed up that process.

NE: Oh, that's easy. Too much use of microwave ovens. You know those things rip holes in the fabric of our universe. 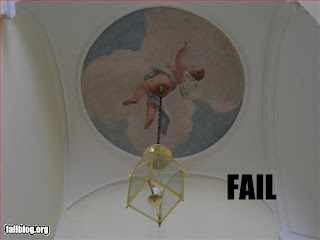 Every now and then, I check to see what search terms are leading hapless readers to my blog. This time, I found a few that are simply too strange not to share.

1. Don't start nothing you can't finish: I feel to truly understand this search phrase, I may need a lesson on how, exactly, one starts nothing and then proceeds to finish it.

2. Man the Jelly-hole, Captain!: I don't even want to know. Actually, I do want to know, but that's the sort of intrepid curiosity that once got my tongue stuck to a block of salt in a GOAT PEN, so .... no thank you. Lesson learned.

3. Are ostriches suicidal?: They can be. I think if you combine their suicidal tendencies with their clear anxiety and avoidance issues (Why else would they stick their heads in the sand to hide from predators?), it's pretty clear someone should be slipping some Prozac into their food supply.

4. Cupcake discrepancy: I don't know what kind of discrepancy this searcher had in his cupcake, but the cupcakes on THIS blog are always awesome.

5. Friggin' frack: I can't explain this. In the four years I've been running this blog, I don't think I've ever typed either "friggin'" or "frack." The fact that this search term landed the reader on a post about lemonade makes it even more mysterious. Perhaps Google was having a little joke at this reader's expense? Friggin' frack!

6. Are you a redneck if you wear underwear outside your clothes?: No, sir, you are not. You are simply an idiot.

7. C.J. Redwine hooch: Really? REALLY? Hooch? As in the esophagus-melting swill a few misguided souls brew in their bathtubs? Or as in hoochie-mama? Either way, I invite you to come say it to my face. I'll show you how to turn hooch into a verb. To hooch: The act of pulling someone's internal organs out their left nostril.

8. How to snort things: Things? My dear reader, as an accidental snorter-extraordinaire, allow me to tell you that narrowing the field of the "things" you are willing to snort is a step in the right direction. Although, since your question seems to reveal a lack of understanding of the basic concept of jerking large quantities of air through your nose in a manner designed to produce a sound reminiscent of an angry boar, I fear you need practice before you can move on to snorting "things." And may I recommend you steer clear of fresh cinnamon gum and chicken nuggets in your snorting exploits? Those two items alone have nearly been the death of me.

9. Should I poop?: *blinks* I can't really answer that without knowing further details of your dilemma and frankly, you've already told me TOO MUCH for my own personal comfort. I'm going to take a gamble, though, and go with YES. Yes, you probably should. Though, I don't really understand why the alternative was even a consideration.

And finally, my personal favorite:

10. The grossest website ever: I was about to strenuously argue against this unfair association with my blog, but then I realized in this post alone I reference poop, snorting chicken nuggets, jelly-holes, and wearing underwear outside one's clothes, so ... sure. Okay. Whatever, Google. But if I'm going to carry the title, by golly, you'd better be ready to give me a crown. *holds out hand and waits*
- May 03, 2011 9 comments: