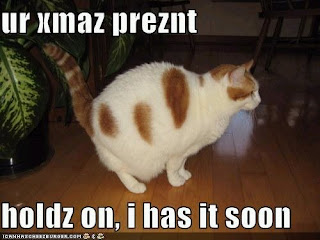 1. Discourage the cat from eating tinsel.

2. Sweep the floor and light candles instead of using all the lights. That way it looks mopped as well.

3. Discourage the cat from jumping into the middle of the presents.

6. Discourage cat from getting on kitchen counters to investigate thawing turkey.

8. Agree to children's demands to make gingerbread poop for Santa as well.

9. Wonder aloud why all the stockings aren't full of coal.

11. Discourage the cat from "playing" with the ceramic nativity set.

12. Super glue the hapless shepherd's head back in place.

14. Remind cat that tinsel is always much nicer on the way in than on the way out.

15. Realize cat either A) doesn't understand what you're saying or B) doesn't care and that you have sunk to the level of having one-sided passionate debates with a four-legged animal and break out the eggnog.

18. Agree solemnly that even though a Bakugon is the size of a plum, a three year old could swallow it.

20. Discourage the cat from chewing through the Christmas light cord.

24. Set out cookies and eggnog for Santa and forcibly shove all three boys into bed with promises that if they're still awake when Santa gets here, he'll skip them.

25. Sternly discourage the cat AND the dog from eating Santa's cookies.

27. Go to bed with the knowledge that even though we've told the kids not to wake us up before 7 am, we'll hear them outside our door by 6:30.

Merry Christmas to you and your family and may your day be filled with warmth and love!
- December 24, 2008