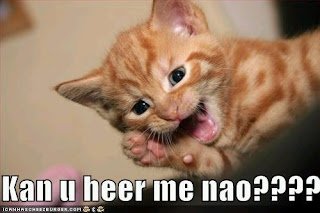 1. It's only Thursday? That seems impossible.

2. This whole cram-as-many-hours-as-possible-into-my-work-schedule-and-still-keep-up-with-writing-kids-and-housework thing is not nearly as easy as it sounds.

4. Unlike their first single from their latest album (Chinese Democracy), this song actually had potential.

5. Yanno, a hook, or something very close to it which, sadly, their first single completely lacked.

6. How does a band that gave us Sweet Child Of Mine, Knocking On Heaven's Door, and Welcome To The Jungle write a song without a hook???

8. "Better" has potential but fell far short of the mark for one reason: poor audio mixing.

9. Just like the first single from this album, the guitar overrides the vocals and the bass notes are wimpy at best with the end result sounding like something a garage band mixed in, well, their garage.

10. This is GNR we're talking about. Surely they could have hired the best producer and worked in the best studio. It's not like they can't afford it.

11. Of course, I have to acknowledge the very real possibility that most of their profits went right up their noses.

12. Anyway, I'm disappointed because I hate to see any artist--band, author, actor--who's been at the pinnacle of their career slap together a half-hearted effort and call it their best.

13. Starshine's birthday was Tuesday. He woke up that morning, rushed into my bedroom, and announced that he hadn't slept well.

14. I smiled and told him I understood he'd been too excited to sleep.

15. He looked confused and informed me that he hadn't slept because he'd been growing.

16. He then proclaimed that he'd only come up to the middle of his forehead when he was seven and didn't I notice the difference?

17. I agreed he was much taller than the night before.

18. He spent his birthday money on two new Wii games and a mini trampoline.

19. He wanted me to try the trampoline.

21. Turns out I need to vigorously tie down certain parts of my anatomy for that particular activity to be safe for anyone in a five foot radius around me.