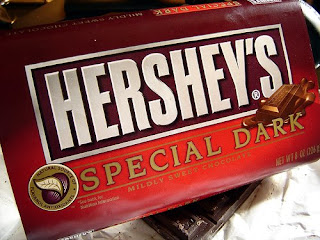 2. Somebody, somewhere, sued when it was found that their copious consumption of dark chocolate was directly responsible for their fifty pound weight gain.

3. The high concentration of anti-oxidants in dark chocolate reverse the signs of aging--eat too much and you're Benjamin Button.

6. It's a confirmed fact that substituting dark chocolate M&M's for regular M&M's during writer's sessions gave us such cinematic gems as Gigli and Glitter.

7. Reverse Psychology: Tell a woman she can't consume an entire chocolate bar in one sitting and see how long it takes her to defy you.

And that's your Friday Top Ten list for the day, folks. Go forth and consume dark chocolate!
- April 24, 2009