Beth, a fellow Pixie, had a busy May with three book releases! Her writing is rich in historical detail and vivid descriptions that transport her readers to another time and place. Daughter of the Wind is already garnering rave reviews and winning contests and I asked Beth to give us a peek into her own rich family history and how that influences her passion for the past. 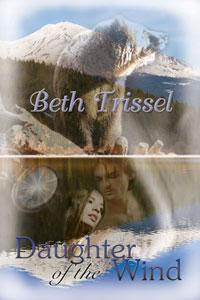 As Galadriel said to Frodo in The Lord of the Rings, “You are a Ring-bearer, Frodo. To bear a Ring of Power is to be alone.”

To be passionate about history so that you feel it in your very essence and long to commune with the past is often to be alone. One profound way I’ve found to connect with those who’ve gone before me is through my writing.

Years ago, while researching family genealogy, I gained the inspiration to write historical romance novels set in early America. Raw, powerful, the colonial frontier drew me with stirring tales of the French and Indian War, Pontiac and Dunmore’s War. My ancestors had interactions with the most feared tribe of that day, the Shawnee, including family members taken captive. Much of my writing features my early Scot-Irish forebears who settled in the Shenandoah Valley of Virginia and surrounding mountains.

This communion with the past is my motivation for the novels I create, not the market; I was informed early on by New York editors that I should write other settings, preferably European. I ignored them. And they never published me. J But if I have no urge to visit a particular past, I won’t go there. I suspect this sets me apart from many writers. I’m thankful that at the Wild Rose Press a good story is judged according to its merits and not the perceived popularity of the time period.

So, welcome to the colonial frontier where the men fire muskets and wield tomahawks and the women are wildcats when threatened. Hear the primal howl of a wolf and the liquid spill of a mountain stream. Are those war whoops in the distance? Ever heard of bear walking?

Daughter of the Wind is a light paranormal romance with strong American historical roots. Set among the clannish Scots-Irish in the mist-shrouded Alleghenies, it's a tale of the clash between peoples and young lovers caught in the middle. Ever influenced by my regard for Eastern Woodland Indians, I interwove mystical, Native American elements with 'Daughter.'

Through the Fire is an adventure romance with a Last of the Mohicans flavor and a mystical weave. Some of the most unusual aspects of this story are based on individuals who really lived. A passionate love story set during the French and Indian War, Through the Fire has finaled in more contests than any I've written, including the 2008 Golden Heart®.

Not to neglect my fascination with the Revolutionary War and gracious old homes. Stick around for a wild ride into Carolina Back County and the battle between Patriots and Tories. Our hero is the former and our heroine the latter––hey, it happened.

Enemy of the King, a historical romance with paranormal element, is my version of The Patriot. A big fan of Daphne Du Maurier since my teens, I was also influenced by her mystery/ghost story, Rebecca. Our Virginia home place, circa 1816, and other early homes left deep impressions on me. I've long harbored suspicions that sometimes those who've gone before us are not entirely gone.

All my new releases are available in both digital download and paperback from The Wild Rose Press and all major online booksellers. Local bookstores can order them in.