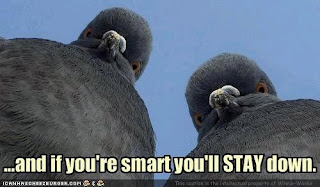 1. Yesterday, I channeled the Pigeon Mafia while visiting our local electronics store and emerged victorious.

2. It all started on Friday, when my hubby took me to that same electronics store to hunt for an affordable laptop.

3. Turns out you don't need a Shiny New Laptop Fairy when you have a loving husband.

4. We were looking at several notebooks--all of which have ridiculously tiny keyboards AND screens. The keyboards I could probably get used to. But I wear reading glasses OVER my contacts. A small screen is not my friend.

5. A salesman came over and pointed us to a refurbished laptop that was just a bit more than the notebooks and told us, and here I quote, "The notebooks don't come with Office installed but THIS one does."

6. We confirmed this salient point with him several times, looked over our options, and decided to purchase.

7. Our first sign of trouble came the next day when Clint tried to open the Office program only to learn it was a TRIAL VERSION.

9. Our fury was abated somewhat when friend and fellow writer Myra McEntire came to our rescue with a disk for Microsoft Office 2003, which is light years better than the '07 version we thought we were getting on the laptop.

10. Then, the laptop refused to turn on every time we pressed the button. Like there was a super secret code needed to activate it's power source and we, hapless fools that we were, didn't have it.

11. My fury returned, along with a healthy dose of I Might Kill Myself A Salesman, when I took it with me Monday afternoon to an appointment for Daredevil up in Nashville.

12. I had two hours of time to kill waiting for him and decided I would get the bulk of my critique reading done during that time.

14. The laptop refused to turn on. Refused. I tried pressing the "on" button quickly. Slowly. Somewhere in between.

16. I texted Clint asking for advice.

17. He suggested I keep trying.

19. For an hour and fifteen minutes.

21. With no back-up plan, I was left twiddling my thumbs and thinking of all the interesting ways I could torture that salesman and leave him huddled in the fetal position, crying for his mama.

22. By the time I got home, I was in full battle mode. Clint recognized it, grabbed the receipt and the computer's box, and we left immediately for the electronics store.

23. When we walked in, I saw two employees standing at the cash registers--the salesman who "helped" us and another man.

24. I stood in the other man's line since I was likely to open any conversation with our salesman with "You're a liar!" and usually things go downhill from there.

25. The man who helped us turned out to be an assistant manager, which was good, since I was going to ask for a manager anyway.

26. I told him the computer was defective--he proved this himself by trying several times without success to turn it on--and that we'd been lied to and I was three seconds away from demanding a refund, taking my business elsewhere, and telling everyone I know not to patronize their shop.

27. The store's policy is this: No refunds or exchanges on computers after the seal on the box has been broken. They can fix stuff under warranty and that's it.

28. My policy is this: I was lied to and was sold a computer that doesn't work. I don't want it. I want a new one that works. Now. Scratch that. Yesterday.

29. I pause here to say that I usually get what I want from salesman. This is because a) I speak respectfully, but firmly. b) I know what I want when I go into it and I'M the one making the suggestions, not passively standing by hoping they'll do right by me. c) I walk in the door with the attitude that I'm not taking NO for an answer. Salesmen can smell fear. They eat hesitancy for lunch.

30. They quickly cave to someone who knows her own mind and isn't afraid to speak it. Respectfully, of course. (Hence the reason I didn't speak to "our" salesman.)

31. Contrary to store policy, the manager took our computer back and exchanged it for one that is 2x better, for the exact same price. :)

32. I will say this: The manager who helped us was respectful, genuine, and an all-around stand-up guy. I liked him. Clint liked him. And we're more than happy to give HIM (Not Liar, Liar, Pants On Fire) all of our electronic business.