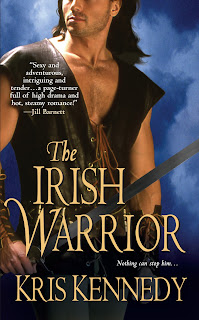 I met Kris Kennedy in the spring of 2008 when we were both Golden Heart finalists. I was quickly impressed with her intelligence, friendliness, and generosity. Once her first book hit the shelves (remember last week's deliciously medieval THE CONQUEROR?), I was impressed with her talent as well. Her writing is rich in historical yumminess, her plot grabs you from the first page, and her characters are people you love spending 300 pages with. When I learned her second novel was coming out this month, I couldn't wait to have her on the blog!

Here's a peek at THE IRISH WARRIOR:

Inhibited, accountant-minded Senna de Valery comes to Ireland to finalize a deal that will save her faltering wool business. What she gets instead is a cunning English lord with dangerous ulterior motives.

Forced to rely on her wits, not her ledgers, Senna frees an Irish warrior chained in the prisons, and together they flee across the war-torn land of medieval Ireland. But Finian O’Melaghlin is much more than a charming, roguish warrior. He is councilor to his king, on a grave mission to recover military secrets, and has a dangerous agenda of his own.

Neither is prepared for the powerful forces arrayed against them …

Neither can resist the fiery passion igniting between them …

King and outlaws, weapons and war: Can love indeed triumph over all?

Kris chose to be interviewed by the always dashing Captain Jack Sparrow. 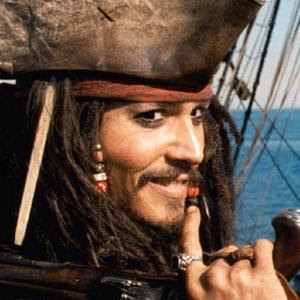 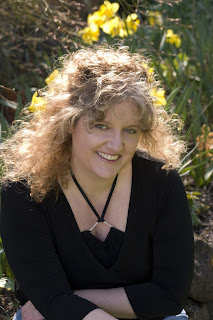 Now that you know who's who, let's dive into the interview and reveal the awesome cupcake my hubby made for Kris. (He thanks Kris for the fantastically simple concept she gave him!) Since her latest novel is called THE IRISH WARRIOR, he made a cupcake fit for an Irish warrior. Without further ado, I give you the cupcake and Kris's interview with Captain Jack. 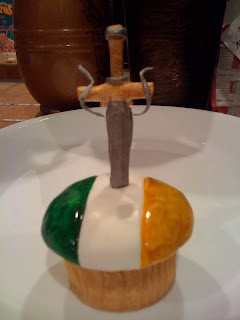 1. Would you classify yourself as a pirate or a member of Her Majesty¹s
Royal navy? Why?

Oh, dear. Are you going to be black-and-white about things the whole
interview? Umm. Bearing in mind the fact that I get terribly, vomitous-ly
seasick, which would be bad for whomever¹s side I'm on, and good for the
opposing team, I'd have to choose . . . pirates. Sorry, Jack.


2. Am I to understand you chose pirates because you actually sympathize with the navy and plan to use your delicate digestive system as a weapon against us? *shakes head* Bad form, my dear. *hands you a bucket* What¹s your favorite thing to do in Tortuga?


3. One can only hope you refer to an activity slightly more agreeable than copious vomiting. If so, I offer myself at your service. I'm offering you free passage aboard my ship to anywhere in the world. Where shall we go, love? Besides the privvy.

Let's go check out all the sea caves of the world! And then, let's anchor
in real close to some of the best smuggling shores in England and Ireland,
because I have an upcoming story about that. You can show me all those
places, right? And you will, right? Because I can . . . sweat.


4. Darling, anyone who longs to spend time with smugglers can't possibly be overly sympathetic to the navy. Who is the hero of your story most like: me (savvy, debonair, and unquestionably smooth with the ladies), the insufferably honorable Will Turner, or that deceptive little minx Elizabeth?

Ohh, Finian is a little of both. I call him a 'good alpha.' He's super
charming, teases the heroine quite a bit, but, unfortunately for you, Jack,
he's honorable too. I say unfortunately, because you do NOT want to meet him
in a sword fight.

5. My dear, I don't want to meet anyone in a sword fight. There are so many more interesting ways to pass the time. Speaking of which. Rum? Or more rum?

Seriously, Jack, you are happy I¹m saying this. Me + Rum is another
vomitous proposition. Anyhow, it leaves more for you. See, I'm generous
like that.

6. I see. In that case, no rum for you! Which leads me to the age old question: Why is the rum always gone?

Clearly, you drank it all. Has no one ever told you that before?

7. You may be right. Or that wicked little pirate Elizabeth may have had an inescapable craving for s'mores and needed a bonfire for her marshmallows. What's the most piratish thing you've ever done?

Hmm, pirates steal things, right? I don't have anything there . . . Are we
talking daring and derring-do too, though? If so . . .I took a cross-country trip on my own the year before I graduated from college. Six weeks, all across the country. Yes I had my car (for part of the time) but it was all me and the open road. It was incredible. Many adventures.

Hey! One of those adventures was . . . gathering gemstones!! Like for a
treasure chest. That makes me a para-pirate, right?


8. There's no such thing as a para-pirate, love. You're either a rogue at heart or you aren't. Despite your vomitous proclivities, I sense a rogue in you. Here's a nice little test. Are they rules? Or more like guidelines?

LOL. Jack, for you, they're merely suggestions. Possibilities.


9. More like pesky annoyances I use when it suits me. I understand you're a story-teller. Any undead monkeys in your stories?

Wow. No, I hadn¹t thought of that. See how hanging with a pirate expands
your horizons? I¹ll have to try and work one in . . .

In The Irish Warrior, though, there are mysterious ancient dyes, more
precious than the Tyrian purple of the ancient world, and they're worth a
man's life, literally. The Wishme dyes have multiple militaristic
capabilities. They are beautiful weapons.

10. Am I to understand you're comparing dyes to undead monkeys? I have to tell you, having lived with one, I strongly suggest you proceed with caution in your plan to include one in your next story. They're devilish little creatures. Any curses? Heartless monsters? Irritating women who insist on taking matters into their own hands?

Ha. Yes to all three.

Check: Curses, although they are more like . . . suggestions. To stay away
from the Wishme dyes. And from the dye-witches (Not a real witch, btw. Not
paranormal-ly Urban Fantasy witchery. Just a person who has this coveted
dye-making skill)

Check: Heartless monsters, except he's a man. The villain. And he actually
DID have a heart, once, but it got all stomped on, and anyhow, it was partly
decaying, so there was no hope. (We're speaking metaphorically here,
Jack. No dead monkeys or decaying beating hearts.)

Check: Self-directed women. Oh, wait, did you say irritating? Hmmm,
well, at one point, Finian the hero has his hand clamped over the heroine¹s
mouth and asks her, "Can ye not hush for a single second?" Then he kisses
her. :) And another time he says she¹s like a spring wind, she just
keeps pushing. So, you mean, like that?


11. Aye, like that. I find myself in sympathy with your Finian. Oft times kissing a woman is the only way to shut her up. It's most unfortunate the pretty creatures usually see fit to apply the flat of their hand to the side of my face once I've successfully silenced them. One of my favorite words is "egregious." Care to share one of yours, love?

Two words: Your Choice. And Your Consequences. Oh, wait. How many words is
that?


12. I'm not overly fond of the word "consequences." Parlay? Or draw your sword?

It totally depends. But for me, well, parlay first. Because Jack, the rest
of us have to live with these people later. You get to sail away on your
Pearl. We land-lubbers have added incentive to parlay.


13. Understood, love. You've got a crowd of cursed sailors and a nasty sea monster on your trail. How do you escape?

Holy cow. I steal your ship.


14. Slander and calumny! Blasphemy! Steal my ship and I'll hunt you down, woman or not. And, I'd bring one very undead monkey along for the ride. And you said you weren't a pirate. Romantic night in? Or adventure on the high seas?


15. Brave woman to risk the contents of her stomach like that. You're welcome aboard, of course, but don't even think about laying one pretty finger on my ship's rudder. My personal motto is: Take what you want, give nothing back. What's yours?

Thanks Jack!!! I¹ll give you a book, if you promise to read it, and
also I'll give away a book to one reader, k?

One lucky reader will win a signed copy of THE IRISH WARRIOR!! Here's how to enter.


3. Check back: The contest is open until 8 p.m. Saturday, June 12th. Please check back to see if you've won and to claim your prize.