Yesterday was our last day in Nanchang. We boarded a flight for Guangzhou mid-morning and began the second half of our stay here in China. Johanna did very well on the flight. She took a bottle and fell asleep just after take-off, slept most of the flight, and then woke up to charm the surrounding passengers with her consistent attempts to fling herself backwards into the aisle so she could see everyone behind her. Trying to hold on to her when she's awake is like trying to wrestle a twenty pound wet fish.

A few things really stood out to me about our time in Nanchang (pronounced Nan-chung), so I thought I'd share them with you. First, of course, it will always have a special place in our hearts because it's where we first met Johanna. I'll always treasure the hours we spent in our hotel room playing, sleeping, and bonding with each other. 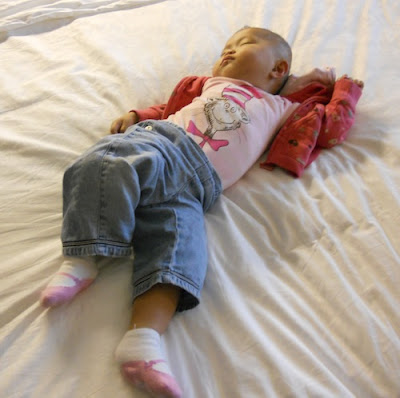 I'm also grateful to our agency's staff. Evelyn and Karen were available to us 24-7 and clearly loved our babies. It was sad to leave them, even though I wanted badly to get to Guangzhou. 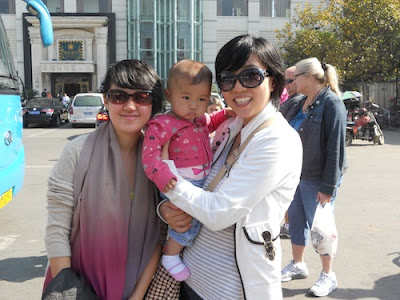 Nanchang is city fairly free of Western influence. Nothing is in English, old customs are still followed, the food is mostly unrecognizable to us, and because they rarely see Americans, we were literally mobbed every time we went outside the hotel. It was an interesting experience. Sometimes, the people crowded too close, reaching out to touch Johanna and making it impossible for us to move forward. But mostly, they just wanted to understand what we were doing with a Chinese baby (Evelyn and Karen provided us with a card to take with us everywhere that explained in Cantonese that we were adopting an orphan and bringing her to America.). Once they understood we were adopting her, we got many thumbs up signals and smiles as the people kept repeating the Cantonese phrase for "she's going to have a beautiful life."

One of the "Western" things we really missed in Nanchang was the concept of cold drinks. No one drinks anything cold here. The soda is room temperature (and the two soda options are Coke and Sprite. No diet.), and the Chinese prefer to drink their water hot. I was excited to hear that the ice in the White Swan hotel in Guangzhou is safe for us. I really can't wait to have cold drinks every day!

Nanchang is also a place where old world beauty and recent poverty live hand in hand. We saw a royal palace, a pristine Buddhist temple, and some lovely artwork. We also saw (usually side by side with the beauty) dilapidated apartment buildings with laundry hanging from racks at every window, trash littering every alley, enough air pollution to make L.A. look like an environmentalist's dream, and people curing meat by hanging it over nearby telephone wires. 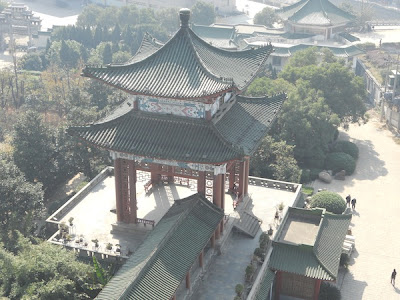 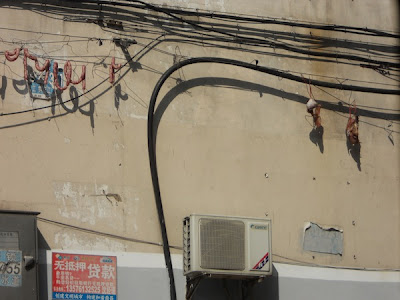 We also had a strange experience in The People's Park. It's a gorgeous park with a playground, exercise equipment (like you'd see in a gym), footpaths, statues, a river, some carnival rides, some places for the Chinese to do Tai Chi or traditional dance, and a life-size checker board where the checkers each weighed about 50 lbs. Right after we arrived, a Chinese man in a red jacket with a professional looking camera around his neck began snapping pictures of our group. We were used to the Chinese wanting to take pictures of the strange Americans by that point, but then I noticed that he wasn't actually taking pictures of our entire group (9 families total). He was taking pictures of Johanna.

After the fourth shot, I figured he had enough and walked away. He followed. For the next twenty minutes, he followed us everywhere and consistently took pictures of Johanna only. Other moms began crowding around my stroller to block her from his view. He got creative and took to the high ground. Then, as Clint and I stood beside the stroller for another couple to snap our picture, he came up behind the couple and literally rested his camera on our friend's shoulder so he could take our picture too.

I'd had enough. It's one thing to take a few pics of a pretty baby, but who needs twenty shots of a stranger's child? It felt intrusive and unsettling. I told Evelyn about him and she caught him taking yet another picture of Johanna. Turns out, Evelyn can be a scary girl when she needs to be. I'm not sure what she said, exactly, but it sounded a lot like "Bother this baby again and I'm going to open up a can of funky, Nanchung style." He left us alone after that. Clint told Evelyn if Johanna ends up on an advertisement to please send us a picture of it. :)

That was a memorable experience (and gave me new sympathy for celebrities trying to protect their children from insistent picture-taking paparazzi), but above all, what stands out to me the most about Nanchang is the traffic. It's insane. If you're from a big city and you think you know what I mean when I say "insane," you don't. I've never seen anything like it. The freeway was clogged with buses, cars, people on scooters, on bikes, ON FOOT. No one payed any attention to pesky details like lanes. In fact, I don't know why the city bothered to paint lines on the road at all since everyone ignores them and instead, drives (or walks) through gaps in the existing traffic. Once we got to the city itself, I realized what I saw on the freeway was tame in comparison. I decided they didn't need traffic lights any more than they needed lanes because no one paid attention. The streets and intersections are a maze of people walking, riding bikes, riding scooters, driving cars, or driving buses. Everyone just leaps through whatever gap is available. If you have to turn across traffic, you just start turning and slowly work your way through everyone else. People drive in the opposing lanes like a sick game of chicken. It's INSANE. I soon learned the rule of the road is that whoever is bigger has the right of way. Since we were in a bus everywhere we went, that meant we did a lot of laying on the horn (horns beep incessantly there) and driving on the wrong side of the road while smaller buses, vans, cars, and people had to scramble out of our way because we were bigger.

You almost have to see it to believe it.

Nanchang was an experience. I'm sure Guangzhou will be an experience in its own way too. Six more days and we get to leave for home!