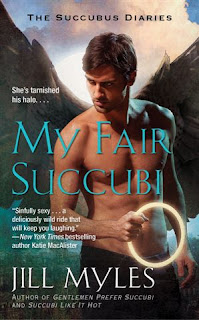 I first met Jill Myles after signing with Holly. Jill was one of the first of Holly's existing clients to welcome me to the team via Twitter. I enjoyed Jill's easygoing friendliness and sense of humor, and when the first book in her series hit the shelves, I snatched it up. Jill's books have two traits I absolutely adore--humor and edgy plot. Also? You might need a fan while reading. Trust me.

When Jill agreed to come on the blog and introduce her series to my readers, I was thrilled! MY FAIR SUCCUBI is the third in her series. Here's a peek at the series itself:

Jackie was an ordinary museum docent until a mysterious vampire and a fallen angel made her into a succubus. Now a sexy immortal, she’s caught between an age-old war between angels, demons, and the immortals exiled to earth. When everyone else is choosing sides, which will she pick? The good guy or the bad boy? Maybe she wants both…

Want to try this series for yourself? You could win a signed copy of book one! More on that later. First, let me introduce today's guests.

Now that you know who's who, let's reveal the beautiful cupcake my hubby made in honor of Jill's series and get to the interview. Since the series follows, among others, a fallen angel, my hubby made an angelic cupcake (Which he feels is a very nice break from all the zombie parts he's had to make lately). Without further ado, I give you the cupcake and the interview! 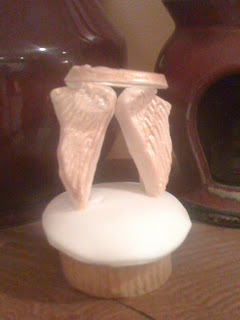 
Red eyes! But mine are from peering at the computer for too long, and the fact that I’m trying to wean myself down to one cup of coffee a day.

2. Plus, I highly doubt yours command instant obedience like mine. Watch me! Only drink one cup of coffee a day! See? You're welcome. I like to spit at my enemies from whichever end is closest to them. Do any of your characters have cool abilities like that?

Most of my characters have cool abilities, but I think you are alone in the powers of projectile expectoration. Jackie (my succubus) can put people to sleep with a touch, though, and pick through their dreams. That’s pretty cool, isn’t it?

3. Only if their dreams contain sexy were-llamas. Or cookies. If I had a nickname, it would be The Awesome. You?

Indecision Girl. Actually, my friends used to joke around and say this would be my superhero name. I’m a fairly cautious person and I am not big on taking chances, so I waffle. And waffle. And try to get all sides of a story before I move forward. I was one of those people that would do the Choose Your Own Adventure, but I would read both possible scenarios before deciding which one to follow – I didn’t want to make the wrong decision!

4. No need to fear any wrong decisions! Simply looking into my eyes and OBEY. I hang around this blog because I love stories. What’s your story about? Bonus points if it includes a llama.

Alas, not a lot of llama running around in my stories. I love love stories too, though! My Succubus Diaries are kind of a wacky adventure wrapped up in a love story. It’s about a normal girl that gets turned into a succubus and finds herself immersed in a world she never even knew about – a world full of sexy, controlling angels and devilish vampires. And she finds that she’s torn between two men in particular.

5. First, I didn't say I love love stories. I said I love stories. What kind of super scary shape-shifter would I be if I got all mushy over love stories? Second, there's no need to be torn between two men. Either spit at them both, or make them your minions. Problem solved. You’re making me a cake worthy of my awesome Were-llama status and decorating it to represent your story. What does it look like?

I think it must have boobs on it. Somewhere. And wings. Wings and boobs. You’re welcome. ;)

6. You have just moved up the scale on my Awesome-meter. Also? I'm not sharing this cake. Thankfully, as I can spit at enemies from either end, I can simultaneously eat this glorious offering and guard it as well. Any Were-llamas in your book?

Not yet, but never say never.

7. That's exactly what that Bieber kid said minutes before I turned him into a were-llama. Anyone in your stories who might be a Were-llama and you just haven’t figured it out yet?

Maybe in my fall book? It’s going to be called BEAUTY DATES THE BEAST, and it just MIGHT involve ‘weres. There’s bound to be a were-llama somewhere, right?

8. For your sake, I certainly hope so. *glares with AWESOME RED EYES* Llamas or camels and why? Think carefully.

Camels, because of the hump factor. Get it, hump? (I am so twelve.)

9. You are so dead. *prepares spit* I give you a baby Were-llama as a companion.(Though after your previous grievous insult, I'm not sure I want to.) What do you name her?

10. Hm...she does expectorate liquids with style, though regrettably she's yet to master the highly effective Shoot Them From The Basement skill that serves us were-llamas so well. My favorite word is “awesome” because, yanno, look at me. What’s yours?

Douche. It’s just kind of a catch-all, affectionate sort of insult. Pair it up with a –bag and you have my next-favorite word.

11. My next favorite word is OBEY. As a young Were-llama, I dreamt of taking over the eastern seaboard one face full of spit at a time. What did you dream of doing when you were young?

I wanted to be Indiana Jones aka an archaeologist. That never changed until senior year in high school when my art teacher (may we curse his name) had ‘career day’ and pointed out the realities of the payscales of the jobs we were pursuing. I had no idea that your average archaeologist made roughly less than the dudes at Burger King.

12. Plus at Burger King, you get a crown. Cake or cookies?

Cake, because then there’s a chance of ice cream, and ice cream is my One True Weakness.

13. My One True Weakness is a mirror because, yanno, look at me. Do you share chocolate?

Of course! That way, there is no shame of eating that many calories alone. If it’s shared, then I am not the only weak one.

14. It takes more strength to snatch chocolate from someone's unwilling hands than to share what is already yours. That's my philosophy at least. The Zombie Goat invasion is upon us. How will you fight them off?

I play a lot of Left 4 Dead on the X-Box, so I like to think that my skills of fighting off zombies with frying pans and baseball bats have been honed to a razor edge.

You humans. Honestly, it's so much easier just to gather up some bodily fluids, take aim, and let fly.


Thank you, Jill, for such an entertaining interview! See? I told you she was funny! To find out more about Jill and how to buy her books, head to her website.

Of course the fun isn't over yet! Jill is giving away a signed copy of book one, GENTLEMEN PREFER SUCCUBI, to one lucky commenter! Giveaway is for U.S. only. Here's how to enter:


2. Tally it up:
Please tally up your entries and leave the total in your comment.

The contest is open until 8 p.m. (central time) Sunday, March 6th. Please check back to see if you've won and to claim your prize!