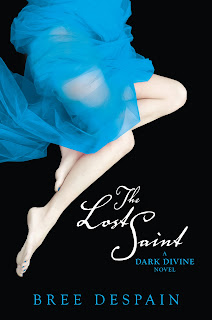 It's no secret I'm a huge fangirl of Bree's. THE DARK DIVINE made my list of best books I read last year, and Bree was one of the first to take on the Were-llama. (Brave girl) I tried to win a copy of THE LOST SAINT on her blog by guessing the correct title given only the letters TLS. It should be noted that while I (among several others) guessed the right title, my best guess was TRY LACTATING SIMULTANEOUSLY. I don't understand why Bree didn't immediately suggest a title change with her publisher. I know I'd pick that up off the YA shelves.

Anyway, I didn't win a copy, and was planning to buy my own when the book hit the shelves, but my sister (who is also a devoted Bree fangirl) sent me the book for my birthday. I devoured it in one sitting. It had all the elements I loved from the first book--complex characters, lyrical prose, and tension constantly coiling tighter and tighter until you wouldn't even dream of shutting the book before you reach the last page. But this book? Oh, THIS BOOK. I won't give away any spoilers, but the thing that happens on the last page? I was yelling at the book. Yes. And then I took to the Internet to yell at Bree and demand the sequel. Which she is writing now. I wonder if she needs a beta reader? *schemes*

Here's a peek at THE LOST SAINT: (Warning: Spoilers for THE DARK DIVINE included.)

Grace Divine made the ultimate sacrifice to cure Daniel Kalbi. She was infected with the werewolf curse while trying to save him, and lost her beloved brother in the process. When Grace receives a haunting phone call from Jude, she knows what she must do. She must become a Hound of Heaven.

Desperate to find Jude, Grace befriends Talbot—a newcomer to town who promises her that he can help her be a hero. But as the two grow closer, the wolf grows in Grace, and her relationship with Daniel is put in danger—in more ways than one.

Unaware of the dark path she is walking, Grace begins to give into the wolf inside of her—not realizing that an enemy has returned and a deadly trap is about to be sprung.

I was thrilled to invite Bree back to the blog. This time, she decided to put the Spork of Doom in his place.

Before we get to the interview, it's time to reveal the cupcake my hubby made for Bree. Because this is a big deal in THE LOST SAINT, Bree and I agreed a white wolf's head would make the perfect cupcake. My hubby complied, but would like to post the following disclaimer with this week's cupcake.


"The following cupcake is supposed to be a wolf's head. It is not a panda bear's head. It is not a dog's head. It is, however, the best the artist could do given that he had the flu but loved his wife enough to still drag his sorry carcass into the kitchen and spend two hours slaving over a non-panda, non-dog white wolf's head. If any reader takes exception to the quality, he begs of them to remember that he had THE FLU. And if any reader still takes exception, he politely invites them to make their own life-like cake sculpture, and he'll even more politely tell them where they can stick it."

Without further ado, I give you the white wolf's head cupcake and the interview with Bree and the Spork of Doom. 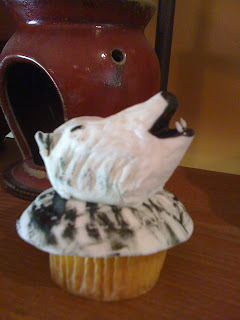 
I don’t do the minion thing. I’m far too bossy and stubborn. But I am in the market for worthy nemesis. Are you game?

2. *Checks out shiny, three-tined appearance in the mirror* Bring it, you non-tined fool. Being a Spork of Doom takes moxie. What’s the sporkiest thing you’ve ever done?

When I was a lot younger, I (pretty much on a whim) took a semester off college and flew across the country by myself to take a job writing and directing plays for at-risk, inner-city kids from Philadelphia and New York. I didn’t know anyone there, and the teens I was working with came from very different places than where I’d grown up. I was scared half to death when I got there, but it turned out to be an awesome experience that changed my life forever.

3. What a coincidence. I am also an awesome experience that will change your life forever. When I’m not busy taking over the world, I like to eat pie. What kind of pie do you think is worthy of my Spork of Doom status?

A Hostess brand cherry pie. Preferably eaten straight off the road after it’s been run over by a car outside a cemetery. I highly recommend it. It’s my favorite way to eat pie.

4. I don't know whether to be insulted or intrigued. It would be very sporky and doomy to eat pie straight off the road outside a cemetery. Then again, you might just be trying to fool me into eating roadkill, and IT WON'T WORK. Unless, of course, the roadkill happens to be you. What’s your favorite thing to do with a spork?

5. An entire world to conquer, and you use the blessed tines on chicken? *shakes head* And here I thought you might be a worthy nemesis. I have the ability to be simultaneously spoon, fork, and weapon of mass destruction. What unique ability do you have?

I can beat just about anyone in a burping contest. I live in a house full of boys. They live in awe of my special talent.

6. Ha! I have minions who do my burping for me. In this day and age, a savvy spork bent on world domination can’t afford to ignore a good marketing campaign. I’m thinking t-shirts with “Spork or Die.” If you made a shirt with your own slogan on it, what would it say?

7. Was your first love cherry-flavored and run over outside a cemetery? If I had to compare myself to anyone in history, I’d have to say I’m most like Napoleon. Only skinnier. And shinier. And smart enough not to lose my empire at a place with a ridiculous name like Waterloo. Who are you most like and why?

I don’t know who I’m most like, but I can tell you who I’d most like to be like: Audrey Hepburn. Not only was she beautiful, smart, and talented, but she also dedicated many years of her life to UNICEF. And when she was a young girl, she carried secret messages for the underground resistance against the Nazis in her ballet shoes.

8. Little known fact: Audrey Hepburn was secretly a spork. It explains the moxie. Why is your job just as much fun as world domination?

I get to wear yoga pants all day long, eat cinnamon bears and chocolate for lunch, and watching shows like Vampire Diaries, Friday Night Lights, and Buffy The Vampire Slayer are considered “research.” It’s quite awesome.

9. I bet you bite the cinnamon bears' heads off first, don't you? Me? I spork them right through the middle. In between conquests, I like to read a good story. What can you recommend and why?

I’m currently reading HOURGLASS by Myra McEntire (comes out this June) and really loving it. The main character has a lot of moxie and the guy is pretty darn delicious.

I am also super excited for BACK WHEN YOU WERE EASIER TO LOVE by Emily Wing Smith (releases this April 28th) This book is so beautifully written and also a lot of fun to read. It’s about a girl who is so obsessed with her ex-boyfriend that she goes on a road trip from Utah to California (with a wacky side trip to Vegas) in order to find him—with her ex-boyfriend’s obnoxious best friend along for the ride.

10. I've also read HOURGLASS and found it to be worthy of my spectacular spork status. I suspect the main character is secretly a spork herself. You need to accomplish a secret, night-time mission as my minion. Cloak? No cloak? Why?

I am not your minion. But I wouldn’t mind having my own cloak of invisibility for days I have no desire to do my hair before leaving the house.

11. Warning: A cloak of invisibility is useless against me. I will still KNOW what your bed-head looks like. And THEN you will be my minion to keep me quiet. My best piece of advice to others is this: “Fear the spork!” What’s your best advice?

I always say this, but it’s pretty much my mantra:


Thank you, Bree, for such an entertaining interview! To learn more about Bree, go to her site. To purchase her books, go here. Of course, the fun isn't over yet! Bree has graciously offered to give away a signed copy of THE LOST SAINT to one luck commenter. (Contest is open to North America)

The contest is open until 9 p.m. (central time) Sunday, April 10th. Please check back to see if you've won and to claim your prize!