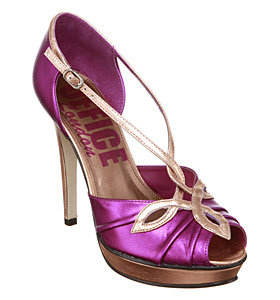 This summer, I decided to try something new. I bought flip flops. Now, I've owned flip flops before. One pair. To use only when I went to the neighborhood pool. But owning several pair of flip flops to use for things like being seen in public? Never.

But friends loved their flip flops. Everyone was wearing them. They were less effort than my heels, so I thought I'd give them a try.

Mostly because the rubber piece in between my big toe and second toe literally wore a HOLE into my foot that was deep enough to force me to bandage it for days.

I can't ever remember a time my stilettos put me in danger of losing a toe.

So, after my summer Flip Flop Experiment, I've compiled a completely scientific and thoroughly unbiased list of my results.

1. Flip flops sound like a fly swatter slapping a brick wall as you walk. Sexy!! Stilettos make a tiny little pop against the floor--a measured cadence that says both "Sexy" and "You're dealing with someone who means business so better bring your A game."

2. Flip flops are nothing but a sheet of rubber with very little traction on the bottom. All you need to perform an impromptu slip 'n slide routine for the public at large is a clean grocery store floor.

3. Say what you will about stilettos being ankle-breakers, at least they don't have a loose flap of rubber at BOTH ENDS just waiting to catch on the stairs or fold over on itself while you're walking.

4. Super heroes never wear flip flops. And not just because of the safety issues. Try looking intimidating in a cape, lycra bodysuit, and a pair of pink flowery flip flops.

5. Flip flops do nothing for your calves.

6. Nothing says I'm a GIRL and I can kick your butt like a pair of awesome stilettos.

8. If Marilyn Monroe had done her famous little walk across the cobblestone streets in Niagra wearing flip flops, no one would still be pointing to that piece of film as an example of the quintessential blonde bombshell.

9. While stilettos look great with capris and a halter top, flip flops do nothing for a pencil skirt and silk blouse.

Now, I'm off to toss my flip flops into the far corner of my closet where they can dream of eating away at my second toe while slapping against the pavement, searching for a tiny crack to catch in so they can face plant me in front of an audience.
- July 28, 2010