Our Traveling Comes To An End 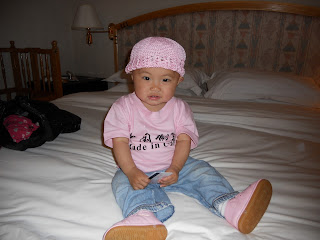 We're home,  now, and busy trying to recover from some serious jet lag. We've worked to get our days and nights straight and Johanna is almost there. She's still waking up ridiculously early, but it's getting better. She cried for the first couple of hours after we got home, but I think a lot of that had to do with the fact that she literally hadn't slept for the past 17 hours since she decided it was much more fun to talk to her fellow passengers than sleep for most of our four plane rides.

Speaking of plane rides, the security in the airports in Guangzhou and Hong Kong make our security look like a walk in the park. We literally went through three identical security checks. By the third one, we were wondering what in the world we could possibly have done to our belongings after walking fifty feet from the last security check. When Clint became frustrated and informed the Communist soldier currently checking our bags that the whole system was stupid (or something along those lines), I quickly told him to go on to the gate and I'd wait while our bags were searched yet again. He left, and the soldier was very polite about the entire experience. It still sucked, but I didn't care. We were getting out of China. That was enough for me.

For some reason, our trip home was full of turbulence. Especially on our 11 hour flight. We had so many bumps and jiggles, even Clint, who never gets motion sickness, was sick. Johanna, however, was fine.

The interesting thing about our plane rides was that the staff on the international flights were incredibly helpful, solicitous, and the plane itself was in beautiful condition and had multiple entertainment options. The U.S. flight from San Fran to Chicago on American Airlines? Not so much. It started with the plane arriving late to the gate due to rainy weather. Nothing American could do to control that, but it was stressful for us because we already had a mere 45 minutes to catch our connecting flight to Nashville. When it was clear we'd be leaving 25 minutes late, Clint approached the woman running the gate and asked about our situation. Could we still make our connecting flight? Would they hold the plane for us for a few minutes if they knew we were on the ground and heading their way? Would American provide a cart to quickly transport us from one gate to the next if the gates were far apart? The woman told Clint no, no, and no. Then she said we could fly standby on another flight...except all the flights were full until 5 pm. Our scheduled flight left at 6:30 a.m. We'd already been traveling for almost 25 hours at that point. If we had to hang around for another 11 hours in an airport, we'd be out of diapers and formula by lunch time.

The woman was unsympathetic.

Then the plane arrived and she announced they would be boarding soon in an efficient manner so as to help those of us with connecting flights make our flights. Clint asked if that meant those traveling with small children would board first to get out of everyone's way, and the woman became irritable. She informed him that we would wait until our group was called and that was final.

Once we boarded the plane and settled into our seats, I realized my tray table latch was broken. Not just broken, but mostly gone. And the magazine holder on the seat back in front of me was broken too. I realized that after I shoved the baby bottle into it, only to have it hit the floor. Then, when I opened the tray table, I realized it listed sideways and was totally useless for balancing anything at all. That left us with trying to hold all our baby stuff in Clint's magazine holder while we used his tray alone for any drinks etc we might have.

The plane finished loading and the stewardess announced that we didn't have any running water so there would be no way to wash our hands in the lavatory. By this point, I was worried about missing our connecting flight, frustrated that American cared so little about helping us with the situation, and disgusted that I'd paid so much for a ticket on a plane that wasn't even well maintained. We took off and when the stewardess came around asking about drinks, we asked if we could just have a small bottle of water to fill our baby bottle. The stewardess said no. Then we asked if she could fill it for us. She said no. So I ended up asking for two cups of water and filling it myself. I was beyond frustrated at this point.

Later in the flight, I took Johanna to the one working lavatory (one had a sign on it stating it was out of order.) to change her diaper, only to realize they didn't have a changing table. Each of the international flights we'd been on had a changing table in the lavatory, so I'd expected our domestic flight to have the same. Not only didn't it have a changing table, the entire bathroom was dirty. I ended up standing her over the toilet and trying to change her diaper while working to help her stay upright. When I finally finished, I left the lavatory and informed the stewardess that the bathroom needed some attention. She told me she'd take it under consideration.

As we neared Chicago, we learned we had fifteen minutes to get to our next gate. And that our gate was halfway around the other side of the airport. When we asked the stewardess if perhaps those of us with such a short window of time could de-plane first, we were told no. By that time, many of the passengers around us realized our situation and were gracious enough to stay seated once we landed and let us get out ahead of them. I'm grateful they were so considerate! We ran across the airport, only to realize the stewardess had told us the wrong gate. Thankfully, we found the right gate in time and the lady running the American Eagle connecting flight was nothing but gracious, kind, and solicitous. She assured us she wouldn't have left us behind since we already had boarding passes. I wish her brand of customer service would be taught to the American Airlines personnel who did nothing but treat us like we were troublesome, demanding inconveniences instead of customers who'd paid full price for that flight. I won't ever be flying on American again.

Anyway, we're home now and so grateful to be back! Johanna loves her brothers and enjoys playing with them. She's still a bit clingy to me, but every day she returns a bit more to her bold, outgoing, friendly self. I'm looking forward to a fun Thanksgiving!

I still plan to blog about our experiences in Hong Kong, Nanchang, and Guangzhou using some of the over 600 pics we took. I just need a bit more time to rest and feel like my brain is fully functioning again.
- November 22, 2010