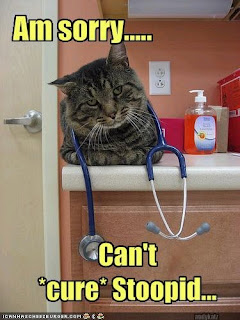 As some of you who follow me on Twitter and Facebook already know, I have a concussion. This is, of course, no surprise since I am the Queen of Unlikely Injuries. I'd like to say this particular injury was interesting, glamorous, or at the very least, not self-inflicted.

It all started when someone's kid ordered a bottled orange cream soda. I hurried back to the wait aisle, snatched open the door of the refrigeration unit we keep stocked with salads, cole slaw, butter, creamer, and bottled drinks and found that the day shift person responsible for stocking the unit had failed to do so.

With no handy bottles of orange cream soda at my disposal, I was forced to race to the back walk-in cooler, where we store crates of the stuff on a bottom shelf. The space between the bottom and middle shelf is about three feet. Plenty of room to lean fully across the shelf and reach the case of soda nestled against the back wall. I leaned, grabbed the soda, yanked it out of it's box, and stood up.

Sadly, I missed a very important step in the whole procedure. I was supposed to lean, grab the soda, yank it out of it's box, back up, and then stand.

Turns out backing up was fairly important.

I slammed the back of my head against the thick metal bar of the shelf above me. The pain was instant, as was the nausea, but I didn't collapse there. I'm thankful. It would have taken them an hour to find me and it's cold in there. Instead, I wandered out of the cooler, one hand clutching the orange cream soda, the other clutching the back of my head. By the time I reached the wait aisle, I knew I was in trouble. The room was spinning lazily around me, my stomach was actively protesting everything I'd ever eaten, and my eyes had long since given up any pretense at focusing on mundane things like walls or people standing in my way.

I placed the bottled drink on my tray, responded to a friend's worried query with a request for her to take the drinks to the table, turned around and found myself on the floor.

I can't over-emphasize how desperate I had to be to be willing to lay my head down on the restaurant floor. There are filthier places to be, of course, but all of those involve raw sewage or rotting trash. I didn't care. I couldn't stay upright. I could, however, vociferously protest my manager's insistence that he call an ambulance.

"No ambulance," I said, lying there on that filthy floor, trying to make my stomach stay where it should. "NO AMBULANCE."

I'm not sure why that was so important to me, though I think it probably has something to do with my last ambulance ride. My manager, the newest managerial presence in our store and therefore not yet acquainted with my particular brand of stubborn, shook his head and looked helplessly up at my friend, who glared and said, "Never mind. I've already called her husband. He's on his way."

When he arrived, I was in the office (my manager and co-workers had hauled me in there) waiting to go home. I refused to go to the E.R. They would only tell me to take it easy. Once my hubby realized I wasn't dying, he rolled his eyes and asked if, for once, I could maybe injure something other than my head.

I rolled my eyes and told him this should be proof positive that I should be banned from all forms of housework and restaurant work. The only "work" I've never injured myself on is writing.

I think once writing starts paying some bills, he'll be much more receptive to that argument.

It's now Tuesday morning and though I've argued fiercely (and felt a little better each day), my hubby has stepped in and made a dr.'s appointment for me. Apparently, he's worried I might still die from this. I wonder if the dr. will take my side and advocate me as a candidate for disability? Clumsiness is a handicap, right?
- March 31, 2009